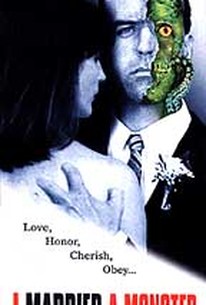 This updated remake of the 1958 sci-fi cult classic I Married a Monster from Outer Space closely adheres to the same basic plotline as the original. On the eve of his wedding to Kelly Drummond (Susan Walters), good ol' boy Nick Farrell (Richard Burgi) wanders into the woods, where he is promptly abducted by aliens. Despite this ordeal, Nick shows up at the church on time and the wedding proceeds. But Kelly cannot help but notice that there is something "different" about her husband. Whereas previously all Nick cared about was drinking and carousing with his buddies, now he is serious, well-spoken, and curiously insistent that he and Kelly begin making babies as soon as possible. When all of Nick's drinking companions undergo similar character transformations, it becomes obvious to Kelly that the man she married isn't the man she intended to marry, but instead the "host" for an impending invasion from beyond..

Critic Reviews for I Married a Monster

There are no critic reviews yet for I Married a Monster. Keep checking Rotten Tomatoes for updates!

There are no featured reviews for I Married a Monster at this time.

I Married a Monster Quotes