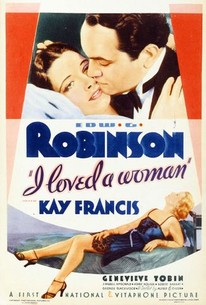 I Loved a Woman Photos

In this drama, the owner of a Chicago meat-packing company falls in love with a beautiful opera singer. Unfortunately, his selfish, social climbing wife refuses to divorce him. He continues the affair on the sly. As his lover's career begins to ascend, so does his business when he becomes the leader of a meat packing trust that sends cured beef to the troops fighting in Cuba. Later, the newly elected president, Theodore Roosevelt indicts him, but then the charges are dropped. By this time, the opera singer has become a star. Her lover too tries to find success, but instead, his business ends up going bankrupt. He then leaves for Greece. When his lover finds out, she too drops everything and follows him.

Critic Reviews for I Loved a Woman

There are no critic reviews yet for I Loved a Woman. Keep checking Rotten Tomatoes for updates!

Audience Reviews for I Loved a Woman

There are no featured audience reviews yet. Click the link below to see what others say about I Loved a Woman!

I Loved a Woman Quotes