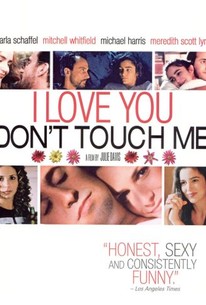 I Love You...Don't Touch Me! Photos

In this independent comedy about the pitfalls of romance in the 1990s, Katie (Marla Schaffel) is a 25-year-old aspiring songwriter living in Los Angeles. Katie is also a virgin; she's been saving herself for the perfect man, but with the passage of time, she's becoming more firmly convinced that he doesn't actually exist. Katie frequently commiserates about the sad state of her love life with her friend Janet (Meredith Scott Lynn), who left her virginity behind a long time ago in the pursuit of a good orgasm but isn't having any more luck in landing her dream man. Katie is good friends with Ben (Mitchell Whitfield), a sweet but nebbishy guy who is crazy about Katie and wants to move their relationship from the platonic to the romantic. Katie, however, doesn't think he's the right man, and she prefers to keep him at arms length; she's shocked (but probably shouldn't be) when Ben ends up sleeping with Janet. When Katie meets Richard Webber (Michael Harris), a successful British songwriter, she thinks that she may have finally found the handsome prince she's been waiting for, but she soon discovers that he's merely a charming frog with a lot of empty promises. Julie Davis, who wrote, produced, directed, and edited I Love You . . . Don't Touch Me!, also appears in a supporting role as Lisa.

Michael A. Candela
as Audition Man

Critic Reviews for I Love You...Don't Touch Me!

This woman is so grating, so self-absorbed, and so without a sense of humor, you can't be sympathetic to her self-inflicted chastity. Katie deserves to be alone. Sadly, she's wound up on the screen.

Comes billed as a progressive, eccentric romantic comedy, but at its heart, it's a pessimistic, cynical, and very traditional.

Provides a clever and comic survey of the dating scene and the complicated nature of sexual politics.

Seems longer than the rough cut of Titanic.

Audience Reviews for I Love You...Don't Touch Me!

There are no featured audience reviews yet. Click the link below to see what others say about I Love You...Don't Touch Me!!

I Love You...Don't Touch Me! Quotes