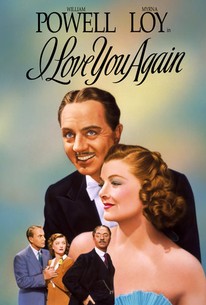 I Love You Again Photos

Those popular MGM co-stars William Powell and Myrna Loy take a break from their usual Thin Man duties to star in the zany comedy I Love You Again. The film opens with Loy prepared to divorce her dull businessman husband Powell. A blow on the head causes Powell to remember his former life as a notorious con man. No one in town has any knowledge of Powell's criminal past, a fact he hopes to use to his advantage. Loy, astounded at Powell's sudden surge of amorous ardor, reconsiders her divorce. When she learns of his true identity, she is even more fascinated. Another blow on the head restores the non-criminal Powell--at least, that's what he and Loy would like you to believe. The film's highlight is a screamingly funny sequence in which Powell plays scoutmaster to a group of surly youngsters (including Our Gang veterans Carl Switzer and Mickey Gubitosi, aka Robert Blake).

Edward Hearn
as Guard
View All

Critic Reviews for I Love You Again

The reappearance of cinema's No. 1 man-&-wife team results in split-second timing of some of the sauciest dialogue since the Hays office eased the ban on innuendo.

One of the duo's finest works together, a rip-snorting screwball comedy that bounces from silliness to insanity with spectacular ease.

...it probably doesn't get the credit it deserves, and it's really quite good.

It gets off to a fast start but dies in the stretch.

Audience Reviews for I Love You Again

This is a hilarious screwball comedy with the great Powell and Loy. I really enjoyed it.

Light as air comedy with the irresistable team of Powell & Loy. Frank McHugh is hysterical as the sham doctor.

I know with screwball comedies you're just supposed to laugh but the whole dual personality thing with William Powell's character wasn't making much sense to me. The story and laughs just kind of lumbered around mostly and that whole boy scouts segment was more annoying than funny. This one's only for the most hardcore of Powell and Loy fans and definitely isn't the place to start. I Love You Again has a few worthwhile moments (namely anytime Myrna Loy is on screen) but it's not their best work together.

I Love You Again Quotes