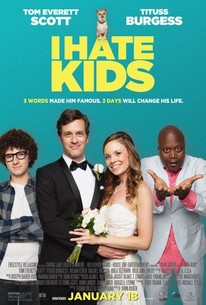 A man who has everything finds out he has the one thing he never wanted. Nick Pearson, a former lothario and author of a best-selling memoir titled "I Hate Kids," is about to marry the woman of his dreams (Rachel Boston) who shares his disinterest in becoming a parent. Everything changes when awkward 13-year-old Mason (Julian Feder) interrupts their rehearsal dinner claiming to be Nick's son. With the aid of flamboyant radio show psychic The Amazing Fabular (Tituss Burgess) and with just days until the wedding, the three strangers embark on a wild road trip to find out which of a dozen eccentric women from Nick's past could possibly be Mason's mother.

Tituss Burgess
as The Amazing Fabular

News & Interviews for I Hate Kids

View All I Hate Kids News

Critic Reviews for I Hate Kids

I endured this modest, sometimes vulgar and often insulting family flick for one reason only: an unusual chance to watch the charming, likable and woefully underrated Tom Hanks clone, Tom Everett Scott, in a rare leading role. Big mistake.

Actions and emotions turn on a dime, chuckles are few and it's clear this predictable film, directed by John Asher, doesn't quite realize how retrograde and often offensive it is - which makes it all even worse.

The single achievement of "I Hate Kids," a new comedy directed by John Asher, is that it is simultaneously tepid and offensive.

It's an uneven film, but there are some funny turns.

"I Hate Kids" is lazy and unfunny, but never surprisingly so, which makes the viewing experience something to dread instead of simply endure.

There are also some enjoyable twists in the tale, even if not a single one of them is terribly surprising.

Audience Reviews for I Hate Kids

There are no featured audience reviews yet. Click the link below to see what others say about I Hate Kids!