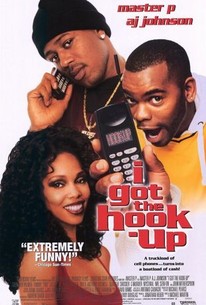 I Got The Hook-Up Photos

Recording star and rapper Master P is the executive producer, screenwriter, and co-star (with A.J. Johnson of The Players Club) of this comedy about two South Central Los Angeles scam artists operating a business in a vacant lot. Working out of their van, Black (Master P) and Blue (Johnson) deal in TV sets and boomboxes, but when a driver mistakenly drops off a cell phone shipment, Black and Blue are ready to dial "C" for cash, bringing in both a local hacker (Anthony Boswell) and sexy Sweet Lorraine (Gretchen Palmer). Business is on the upswing, but then a hood (Tommy "Tiny" Lister Jr.) has a deal go sour and blames Black and Blue. A phone security man (Frantz Turner) and the FBI are also closing in. Rapper Ice Cube does a cameo.

William Knight
as Agent In Charge

Corey Miller
as T-Lay Boy No. 1

Edward Smith
as T-Lay Boy No. 2

Ella Mae Evans
as Customer No. 1

Lawrence Williams
as Family Member No. 1

Vercy Carter
as Family Member No. 2

Dollie Butler
as Old Lady No. 2

Judy Jean Berns
as Customer No. 2

Duffy Rich
as Policeman No. 1

Andrew Shack
as Policeman No. 2

Will Gill Jr.
as Black Lamar

Critic Reviews for I Got The Hook-Up

A waste of time.

Just rambles around loudly, making little sense, before winding to a close.

You could get as many laughs staying home and listening to a dial tone for 90 minutes.

This is the type of movie that, if you manage to get in for free, you still want your money back.

An utter waste of time.

The senseless chases and unexplained affairs and alliances ... wear on the patience of the audience.

Personally, I found it in the same league as Clerks, and people call Kevin Smith a genius.

It's not exactly what I'd call brilliant filmmaking, but it is heads above anything any of the Wayans brood have done in a long time.

Audience Reviews for I Got The Hook-Up

I Got The Hook-Up Quotes