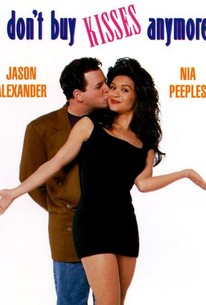 Jason Alexander stars in this sweet-natured romantic comedy, marred by some overblown stereotypes. Alexander plays shoe salesman Bernie Fishbine. Bernie is lonely and shy and ever conscious about his weight problem. He stills lives at home with his mother Sarah (Lainie Kazan) and grandpa Irving Fein (Lou Jacobi). One night, taking a bus back home, he meets Theresa Garabaldi (Nia Peeples), an attractive graduate student in psychology who works at night as a singer in her uncle's Italian restaurant. Bernie falls in love with her, and he thinks she loves him too. To make her proud of him, Bernie stops eating the chocolate kisses he purchases every day from Frieda's (Eileen Brennan) candy store and, instead, works out at a gym to lose weight. But Bernie is crestfallen to learn that Theresa is being friendly to him because she is using him as the subject of her graduate thesis entitled "The Psychological Study of an Obese Male."

There are no critic reviews yet for I Don't Buy Kisses Anymore. Keep checking Rotten Tomatoes for updates!

There are no featured audience reviews yet. Click the link below to see what others say about I Don't Buy Kisses Anymore!