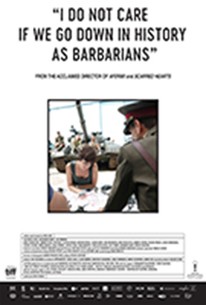 Radu Jude's resonant feature, "I DO NOT CARE IF WE GO DOWN IN HISTORY AS BARBARIANS", chronicles a young theatre director's efforts to stage an accurate re-enactment of the Odessa Massacre - in which Romanian soldiers slaughtered tens of thousands of Ukrainian Jews - despite the municipal government's attempt to censor the director's efforts. Her choice angers a city official who threatens to close the production because of its "anti-Romanian" take on history. However, the reaction to the staged play is one that neither anticipated.

The Lion King Is a Visual Feast, but Offers Nothing New

This is heady stuff, but never daunting.

The movie's refusal to dumb down its ideas, truncate its arguments or skimp on the power of its own verbiage is precisely what makes it so mesmerizing.

Like other contemporary Romanian filmmakers, Jude is well attuned to human absurdities, especially those of pompous public officials.

Until its devastating final scenes, the way "I Do Not Care" makes its points is discursive rather than dramatic.

Barbarians is, in other words, anything but subtle.

Rada Jude's behind-the-scenes drama tackles the charged subject of historical atrocity at one remove, with the grim wit that is a hallmark of recent Romanian cinema.

What gives it nearly all its bite is the big questions it asks about history, and representing history through art.

It is a layered, masterful work that proves that artistic mediums carry tremendous weight, and that what audiences bring to them will determine exactly how much they will take away.

A slippery production of the Holocaust spirals nicely out of control.

I Do Not Care If We Go Down in History as Barbarians doesn't plays games. It is exactly what it is: an indictment of Romania's past...

Radu Jude has turned Antonescu's words against him, using the authoritarian's callous proclamation as the title of his latest movie. The effect is so damning that if Antonescu lived today, he may find that he cares after all.

Director Radu Jude presents a simultaneously playful and intense meditation on the ways in which recreating the past can obscure history's meaning as one gets caught up in the making of illusion.

There are no featured audience reviews yet. Click the link below to see what others say about I Do Not Care If We Go Down in History as Barbarians (Îmi este indiferent daca în istorie vom intra ca barbari)!