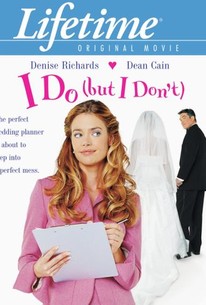 A woman is torn between her heart and her business in this made-for-cable romantic comedy. Lauren Crandall (Denise Richards) is a woman who makes a living planning weddings for other people, but she's never had much luck with her own love life. Lauren thinks she may have turned the corner when she meets Nick Corina (Dean Cain), a good-looking fireman, but then she makes the unfortunate discovery that Nick is engaged -- and she's been hired to help with the wedding. I Do (But I Don't) was produced for the Lifetime cable network, where it first aired on September 13, 2004.

Critic Reviews for I Do (But I Don't)

Audience Reviews for I Do (But I Don't)

I love Dean Cain, and Denise Richards was actually good in this movie. I thought it was way cute.