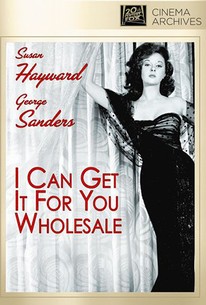 Money, romance, betrayal, double-dealing -- who knew making dresses could be so interesting? Harriet Boyd (Susan Hayward) is a fashion model who has landed plenty of work with a Seventh Avenue dress-making concern. However, Harriet knows that she can't be a model forever, so she is trying to turn her dreams of being a dress designer into reality. She knows that you have to be tough to succeed in the garment industry, but "tough" is practically Harriet's middle name; the ruthless would-be garment mogul lures salesman Teddy Sherman (Dan Dailey) and production whiz Mr. Cooper (Sam Jaffe) from the company and starts her own shop. Harriet has a genuine talent for designing dresses that look good on ordinary women, and the firm soon develops a solid customer base, but the more luxurious and lucrative department stores are looking for something more upscale. J.F. Noble (George Sanders), who runs one such chain, tells Harriet he'd be interested in carrying her merchandice if she was willing to create a line of designer-style gowns. Teddy is against the idea, feeling it doesn't play on their strengths and would be bad for the company in the long run. Harriet, however, is determined to make a name for herself, and when Teddy and Cooper won't allow her out of their deal, she begins making gowns for Noble on the sly. Once the deal with Noble is sealed, Harriet informs Teddy and Cooper that they have no choice but to go along with her; this does not sit well with either of them, especially Teddy, who has become romantically involved with Harriet, though she toys with Noble out of self-interest. I Can Get It for You Wholesale (also released as Only the Best) was based on a novel by Jerome Weidman; the book was later adapted into a Broadway musical, which is best remembered today for providing Barbra Streisand with her first big break in show biz.

Bess Flowers
as Saleswoman
View All

Critic Reviews for I Can Get it For You Wholesale

There is a good share of smart amusing dialogue in this version of the Weidman novel...the good cast includes George Sanders.

Audience Reviews for I Can Get it For You Wholesale

There are no featured audience reviews yet. Click the link below to see what others say about I Can Get it For You Wholesale!

I Can Get it For You Wholesale Quotes