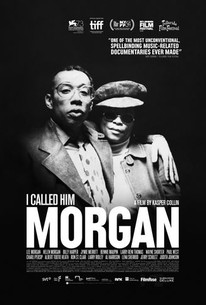 Critics Consensus: I Called Him Morgan doubles as a seductive tribute to its subject's jazz passion as well as an absorbing look at a fatally doomed relationship.

Critics Consensus: I Called Him Morgan doubles as a seductive tribute to its subject's jazz passion as well as an absorbing look at a fatally doomed relationship.

Critic Consensus: I Called Him Morgan doubles as a seductive tribute to its subject's jazz passion as well as an absorbing look at a fatally doomed relationship.

I Called Him Morgan Photos

On a snowy night in February 1972, celebrated jazz musician Lee Morgan was shot dead by his wife Helen during a gig at a club in New York City. The murder sent shockwaves through the jazz community, and the memory of the event still haunts those who knew the Morgans. This documentary by Swedish filmmaker Kasper Collin (My Name Is Albert Ayler) is a love letter to two unique personalities and the music that brought them together. A film about love, jazz and America with cinematography by Bradford Young (DOP, Selma).

News & Interviews for I Called Him Morgan

View All I Called Him Morgan News

Critic Reviews for I Called Him Morgan

I Called Him Morgan is a first-rate documentary. It's also the perfect impetus to explore Morgan's catalogue.

Collin's exceptional, atmospheric film avoids the hysteria and hyperbole of similar true crime documentaries to usher this delicate story in with a palpable sense of sorrow rather than a desire to retroactively point the finger of justice.

Ultimately, Collin's film is one of forgiveness.

"I Called Him Morgan" works as a jazz documentary as well as a bizarre true crime tale about a mysterious crime of passion. All these years later, many questions remain.

Collin's approach to this incendiary material is both blatant and oblique - a bit like Lee's playing itself. Thankfully, we hear quite a bit of that playing in the film.

Morgan's relationship with Helen was so star-crossed and layered it's a mystery why the story hasn't yet been made into a biopic.

The interviews done with Lee's friends hit a genuinely personal tone effortlessly, which is beyond doubt one of the director's greatest merits.

There has not been a penetrating and provocative documentary in my recent memory that chronicles with such curiosity, the insight and intimacy into the musical process and romantic partnership disillusionment

A touching and poetic portrait of a pair of imperfect people, forever transformed by the vices of success, the big city and other all-too-human temptations.

Kambole Campbell
One Room With A View

For those interested in learning more about the history of the Jazz community, or even for those familiar with Lee Morgan and just want to hear Helen's side of the story, this documentary is enthralling from start to finish.

It's a moving portrait of the great jazz trumpeter and of the tragedy that befell him, as seen through the eyes of his woman.

This might be the most pulpy biographical film ever.

Audience Reviews for I Called Him Morgan

There are no featured audience reviews yet. Click the link below to see what others say about I Called Him Morgan!

I Called Him Morgan Quotes