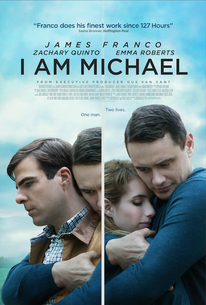 Critics Consensus: I Am Michael takes a determinedly balanced approach to its complex subject, and although the results don't always add up, they're anchored by strong work from James Franco.

Critics Consensus: I Am Michael takes a determinedly balanced approach to its complex subject, and although the results don't always add up, they're anchored by strong work from James Franco.

Critic Consensus: I Am Michael takes a determinedly balanced approach to its complex subject, and although the results don't always add up, they're anchored by strong work from James Franco.

I Am Michael Videos

I Am Michael Photos

I AM MICHAEL is the incredible true-life story of Michael Glatze (Franco), a high profile queer youth activist who created a national controversy when he claimed to no longer be gay and became a straight Christian pastor. The film follows Michael from his life in San Francisco with his boyfriend Bennett (Quinto), where he pursues political activism, a journalist career at XY Magazine, social awareness, and sexual exploration, to his days of personal self-discovery. After a traumatic scare, Michael is plagued by doubt and paranoia, and begins a religious reawakening. Michael renounces his gay lifestyle, rejects his friends, and endeavors to find his "true self." He explores Buddhism and Mormonism, yet ultimately lands at a Christian Bible school in rural Wyoming where he meets his girlfriend, Rebekah (Roberts), and becomes the pastor of his own church. This powerful new film captures one man's haunting journey through modern concepts of love, denial and redemption.

News & Interviews for I Am Michael

Resident Evil: The Final Chapter Will Please Fans but Few Others

View All I Am Michael News

Critic Reviews for I Am Michael

Franco's fantastic here. He gives a fieriness to Michael as a gay advocate, then seamlessly slides into borderline madness as he starts accepting that the "voice" he hears is God's.

Kelly is finding his sea-legs as a director.

Despite some wooden line readings, Franco gives himself fully to the challenge of rendering Glatze with truth and resolve.

Mr. Franco broods and puzzles and vacillates. But he often seems abandoned by a director whose approach is so noncommittal and dramatically limp that it strands the actor, and his character, in a bland purgatory of conflicting motivations.

A soberly stylish, impressively non-judgmental portrait of a controversial real-life case of transformation.

An intermittently affecting - but not entirely convincing - conversion story.

While the film certainly isn't a masterpiece, Kelly has created a film that dares to be different.

Michael is not without his weaknesses and despite declaring that he no longer identifies with being a homosexual, it does not necessary mean that he ceases relationships with the same sex.

Features silent bar brooding, sad piano-scored walking and absolutely no fun, anywhere, ever. The sex isn't fun, the politics isn't fun, the prayer is determined but never ecstatic or tender.

Director Justin Kelly clearly presents the facts of the story, but the necessary psychological content is lacking.

Well, that Franco is over; he's gone down a different road in movies that trifle with gay experience in not always positive ways like the new I Am Michael.

... struggles to find a consistent tone and feels embellished in spots, yet it evolves into a provocative examination of the crossroads between religion and sexuality

Audience Reviews for I Am Michael

A remarkably sympathetic and nuanced character study about an idealist LGBT activist who slowly becomes a pathetic shadow of himself due to fear and religion, and it is beautiful to see how the film never vilifies him, which would have been actually quite easy.

I Am Michael Quotes