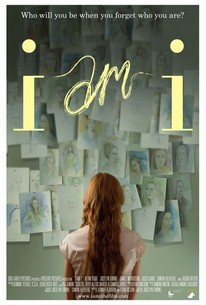 I Am I Photos

I AM I is the story of a young woman, Rachael (Jocelyn Towne), who meets her estranged father Gene (Kevin Tighe) at her mother's funeral. Eager to get to know her father, Rachael later tracks him down at an assisted living home only to realize that Gene suffers from memory loss and thinks he is still a young man. He has no recollection of having a daughter and instead is convinced that Rachael is actually her mother. After trying and failing to make him remember her, Rachael eventually decides to go along with her father's delusions by pretending to be her mother in order to get to know him. Before long, Rachael is visiting Gene every day, finding new ways to bring elements from his past into their present relationship. What began as a search for understanding has become romantic and joyful, but it can't go on forever. (c) Gravitas Ventures

Kendra Chell
as Woman in Car
View All

News & Interviews for I Am I

View All I Am I News

Critic Reviews for I Am I

People sometimes complain that flashy, ostentatious visual stylization takes them out of the movie; what took me out of this movie was its flat, lifeless, unimaginative and conventional visual style ...

The film, financed by a Kickstarter campaign, looks polished enough. But its investors' money might have been better spent elsewhere.

[Towne] proves unable to keep the film's originality from rapidly curdling into preposterousness.

It takes nearly an hour and a half to watch the charade go south. I'm not sure it's worth the wait.

This potentially intriguing concept is given disappointingly bland, flat treatment ...

The moving I Am I presents a refreshing spin on both the amnesia and daddy issues genres.

While there are more than a couple moments of tenderness, which most parents and children will be able to relate to, the great intentions "I Am I" may have had with its intimate story of bonding fall far too short.

Towne's premise is, to say the least, a bit trying, and she does not help matters by presenting it in such a grimly purposeful manner, devoid of any relieving black humor one would think inherent in her material.

Isn't bold work, but it's interesting when it finds true intimacy, masterminding a few suspenseful moments of poor judgment and bruised hearts that hold attention.

Jocelyn Towne's pleasing, minor-key amnesia drama I Am I takes its premise to a troubling extreme.

There are no featured reviews for I Am I at this time.

I Am I Quotes