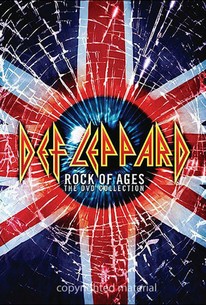 The saga of pop metal superstars Def Leppard is told in this biopic, produced by cable television music channel VH1. The film traces the band's history from their origins as a teenage hard rock act in the English industrial town of Sheffield to the massive success they enjoyed worldwide as multi-platinum recording artists. Def Leppard's rise to the top is depicted as driven by rabidly dedicated lead singer Joe Elliott (Orlando Seale), though along with the money, supermodels and parties there are tragedies as well. Original guitarist Pete Willis (Nick Bagnall) is sacked when excessive drink affects his performance, drummer Rick Allen (Tat Whalley) loses an arm in a car accident and must endure grueling effort to learn how to play again, and lead guitarist Steve Clark (Karl Geary) struggles with alcoholism as he bounces in and out of rehab centers. Through all the tribulations and excess, however, the band sticks together like brothers and fights to keep rocking as a unit.

There are no critic reviews yet for Hysteria: The Def Leppard Story. Keep checking Rotten Tomatoes for updates!

Terrific film on the early years of Def Leppard right to their rise to fame. I really am a huge fan of the band, and I grew up listening to the band. This is a well made movie, one that should definitely be seen by every fan of the band, and with a fine cast of talented actors, brings the story of this great band to life. Nowadays Def Leppard are not what they used to be, but with this film, you get a taste of their heyday, when they made great music. I really enjoyed the film's performances, and the pacing is done quite quickly, and the filmmakers seem to cram to a bit too much history into a short run time, which is a weak point for the film. However the film is very good nonetheless and I think it's a fantastic film on the subject. The film works well as a drama, and it's really a rag to riches story about a band that overcomes, and to everyone that knows this band, they know exactly what I'm talking about. This is a very good drama that is sure to delight fans of the band, though it's not perfect film, it's definitely worth seeing if you the band, ort rock music in general. The cast here are great in their respective roles, and each brings something unique to the screen. Hysteria: The Def Leppard Story is entertaining from the first frame onwards, and it recreates key moments in the bands career. Very good film for what it does, this is a great music drama that though shows issues with story, and budget, does more than big, overcomplicated dramas with big name stars. The beauty part of this film is that it's based on a real story, and is one that's fairly easy to get into. Especially with a band like Def Leppard, their story is one of a kind, and this film definitely captures that vibe.