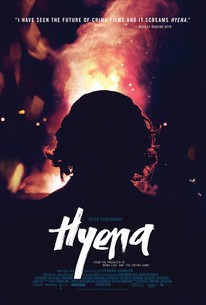 Critics Consensus: Sinking in with as much baleful bite as its namesake, Hyena offers a dark, stylish, and impressively gritty addition to the British crime genre.

Critics Consensus: Sinking in with as much baleful bite as its namesake, Hyena offers a dark, stylish, and impressively gritty addition to the British crime genre.

Critic Consensus: Sinking in with as much baleful bite as its namesake, Hyena offers a dark, stylish, and impressively gritty addition to the British crime genre.

Michael (Peter Ferdinando) is a ruthless undercover coptargeting London's most violent drug traffickers. He and his team aren't above taking their cut from the criminals they're charged with taking on -but when he's threatened with exposure, he's forced to rapidly shift his loyalties and sell out his allies in order to stay alive. Gerard Johnson's ultraviolent thriller - part Nicolas Winding Refn, part Abel Ferrara,and featuring a propulsive score by British new wave legends The The - is a brutal, neon-colored portrait of a man far beyond salvation. (C) Tribeca

Juliet Oldfield
as Tina
View All

By the end, as the camera lingers on Peter Ferdinando's phlegmy, leaking face, Hyena has done something uncommon: It has frightened you.

Hyena's convoluted tale is given a fresh coat of grime by Johnson's direction, which favors handheld cinematography -- often tracking its protagonists from behind -- that gives the action a pseudo-vérité ruggedness.

I suspect that anyone who actually makes it to the bitter end will be enraged by what it does and does not contain.

"Hyena" feels like a throwback to the tough-as-nails British gangster flicks of the 1970s.

The kind of gory British policier from which you come away with the queasy feeling that the world is essentially a butcher shop ruled by greed, murder, cruelty and lust.

Johnson aspires to make Hyena into the stuff of classical tragedy, yet he telegraphs Michael's inward transformation way too soon.

Gritty, hypnotic, drenched in neon lights and shadow, Hyena is a tour-de-force, both as a whole and in terms of Peter Ferdinando's performance.

Johnson is adept at carrying all the baggage that come with such a meaty thriller, and the concluding tragedy comes across with a novelistic sensibility.

The film's hand-held camerawork doesn't build the kind of visual tension a good action movie needs, and Johnson doesn't shape memorable characters so much as sweaty chess pieces, too many of them to keep track of.

[This] drama is a much more bleak, much more angry, much more dirty, and surprisingly more violent film than most of its antisocial fraternity usually ever aspire to.

A vision of a societal underbelly rife with moral ambiguity, unflinching violence and a bunch of people you certainly wouldn't invite over for tea...

Ferdinando is great as a morally ambiguous man on the edge who tries to do the right thing, only to find it's too little, too late. But the script is heavy handed and cliché-ridden.

If you're looking for a gritty british drama, like only the british can do, with a sordid storyline, no happy moments and plenty of shocking moments backed by fantastic performances, look no further. Despite the ballsy ending (come on, you know how it was really gonna end), sometimes the script is too obtuse and clunky to truly engage us. Still, Hyena is a worthy follow-up to Johnson's equally great Tony, sans the dark humor or course.