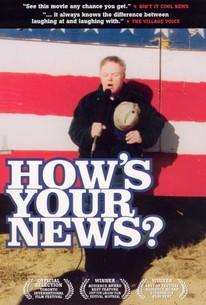 Video artist and counselor to Camp Jabberwocky -- the country's oldest camp for mentally and physically disabled adults -- Arthur Bradford spins this documentary about an unusual news production team. Since 1993, the camp has produced a series of man-on-the-street videos that are funny, sad, and at times extremely awkward. Those they produced primarily for friends and family have slowly gained a cult following including South Park creators Trey Parker and Matt Stone and indie producer John Pierson. The three gathered the funds for the camp video team -- consisting of five reporters with disabilities from Down's syndrome to severe cerebral palsy -- to go on a cross-country trip. Along the way, they interview Vegas showgirls, alligator wranglers, homeless people, cowboys, and truckers. This film was screened at the 2001 Toronto Film Festival.

Critic Reviews for How's Your News?

Clearly created with care, humor and heart, How's Your News? is not so much about "disabled people" as it is about how "we" choose to see them.

Audience Reviews for How's Your News?

There are no featured audience reviews yet. Click the link below to see what others say about How's Your News?!