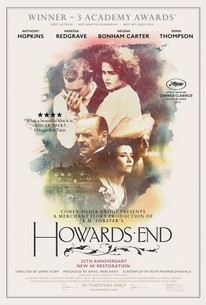 Critics Consensus: A superbly-mounted adaptation of E.M. Forster's tale of British class tension, with exceptional performances all round, Howard's End ranks among the best of Merchant-Ivory's work.

Critics Consensus: A superbly-mounted adaptation of E.M. Forster's tale of British class tension, with exceptional performances all round, Howard's End ranks among the best of Merchant-Ivory's work.

Critic Consensus: A superbly-mounted adaptation of E.M. Forster's tale of British class tension, with exceptional performances all round, Howard's End ranks among the best of Merchant-Ivory's work.

One of the best Ismail Merchant/James Ivory films, this adaptation of E. M. Forster's classic 1910 novel shows in careful detail the injuriously rigid British class consciousness of the early 20th century. The film's catalyst is "poor relation" Margaret Schlegel (Emma Thompson), who inherits part of the estate of Ruth Wilcox (Vanessa Redgrave), an upper-class woman whom she had befriended. The film's principal characters are divided by caste: aristocratic industrial Henry Wilcox (Anthony Hopkins); middle-echelon Margaret and her sister Helen (Helena Bonham Carter); and working-class clerk Leonard Bast (Sam West) and his wife (Nicola Duffett). The personal and social conflicts among these characters ultimately result in tragedy for Bast and disgrace for Wilcox, but the film's wider theme remains the need, in the words of the novel's famous epigram, to "only connect" with other people, despite boundaries of gender, class, or petty grievance. Filmed on a proudly modest budget, Howards End offers sets, spectacles, and costumes as lavish as in any historical epic. Nominated for 9 Oscars, including Best Picture and Best Director, the film took home awards for Thompson as Best Actress, Ruth Prawer Jhabvala's adapted screenplay, and Luciana Arrighi's art direction.

From start to finish, Howards End is a sumptuous visual delight. But the beauty of this film is far more than skin deep.

In its own severe and occasionally stolid way, Howards End offers real passion.

A can't-miss opportunity to experience some of the finest filmmaking of the 20th century.

What sets "Howards End" apart is the complex emotional life of its characters.

Elegant and powerful, accommodating collisions of class and temperament with the grace of a perfect Edwardian hostess, Howards End is the work to which all Merchant Ivory's other films have pointed and aspired.

If this film were a cake it would be a grand one -- rich, sumptuous, oh-so-filling and with numerous tiers.

Howard's End unfolds at a deliberate, measure pace, and it always feels like so much is happening that Ivory will scarcely be able to contain it all.

It is an intelligent movie, a good movie, about real and not fake issues. And it moves the heart.

[Howards End] is an ever-pertinent, wondrous and welcome return to the big screen.

A more troubling and rigorous inquest into a bygone era than usual.

Deeply romantic, political, emotion-led, respectful of music and literature, impeccably dressed and, in one of the characters' own words, "overexpressive".

Vibrant filmmaking at its finest, every frame a painting, the dynamic explored are the underlying tensions between two upperclass turn-of-the-century English families, a plot of land with a house on it between them.

The Merchant-Ivory adaptation of E.M. Forster's "Howards End" is a flat out masterpiece. It's the perfect storm of literature, production design, ensemble acting, costumes, lavish cinematography and beautiful dialogue. The film is emotionally resonant, existentially complex, and profoundly thrilling at times. For a two and a half hour film, the pacing is engaging and lively thanks to the precisely placed camera and magnetic performances. This is tremendous filmmaking.

Howards End is so stunningly beautiful it's like looking at a 140-minute long postcard. It's also just as slow-paced, though. And quite talky. But watching these incredible characters talk, quarrel and love is what makes this film a pleasure. The cast is impeccable: Emma Thompson, Helena Bonham Carter, Vanessa Redgrave, Samuel West, Nicola Duffett and Anthony Hopkins deliver top-notch performances.