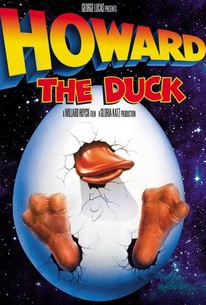 Critics Consensus: While it has its moments, Howard the Duck suffers from an uneven tone and mediocre performances.

Critics Consensus: While it has its moments, Howard the Duck suffers from an uneven tone and mediocre performances.

Critic Consensus: While it has its moments, Howard the Duck suffers from an uneven tone and mediocre performances.

Director and co-screenwriter Willard Huyck has taken Steve Garber's abrasive, beer-drinking and cigar-smoking comic-book character and castrated him, turning him into a wide-eyed cutesy-pie available for the toy shelves. Huyck's Howard the Duck is a being from outer space, blown into Cleveland by an errant laser beam. After a few minutes on Earth, Howard runs into rock singer Beverly Switzler (Lea Thompson), and they become fast friends after Howard protects her from a couple of nasty punkers. The film then degenerates into an extended chase, as Howard and Beverly are pursued by government agents who want to capture Howard before he can be beamed back into space.

Richard Kiley
as the Cosmos
View All

News & Interviews for Howard the Duck

View All Howard the Duck News

Critic Reviews for Howard the Duck

As you watch "Howard the Duck," you get the vivid sensation that you're watching not a movie, but a pile of money being poured down the drain.

In the absence of anything resembling structure, character, point of view or sense of purpose, there is no place else for this empty project to go.

What can you say about a comedy in which the biggest laugh is in the end credits?

Reservations aside, it's hard to fault the tongue-in-bill high spirits of a movie like Howard the Duck.

For all those who cottoned to the charm of the comic books, the duck stops here.

The movie is too scuzzy to beguile children, too infantile to appeal to adults.

Howard the Duck is the single-worst film based on a Marvel Comics character to come into existence.

A fun and fast paced piece of eighties schlock...

The first big-screen adaptation of a Marvel comic book makes their subsequent films seem like the flowers that bloom beneath a heavy load of dense fertilizer.

The best to cling to is that some of the elements are merely insipid and not actively rancid.

In duck talk, it's a quacker -- noisy and shrill.

The sad fact is that the duck gets lost in what becomes a special effects film suspiciously reminiscent of Ghostbusters.

Audience Reviews for Howard the Duck

Somehow I got right through the 80's and up until now without seeing this one. What can I say, aside from the icky suggestion that Lea Thompson was somehow "on" with the duck (hinted at rather than seen), it is no worse than any other action 80's film. Fashions were great, Lea, of course - not exactly great acting, but suited the whole movie which you just can't take seriously. Duck kind of fake looking, but what else would you expect. Fans of the 80's or just bad movies in general should enjoy it.

[img]http://images.rottentomatoes.com/images/user/icons/icon14.gif[/img] Due to the plot and nostalgic visual style, it was always going to be a misfire if it's primary intention was to become a summer blockbuster and unsurprisingly the film was a box office disaster. Not only that, but it's famous for being cited as one of the worst films ever made and even had to be cut because censors reacted badly to the jokes about ducks and condoms but even the most uneven and messy films like Howard the Duck have the power to inspire a fandom. I think the choice to use live action as opposed to animation was a good idea. Howard in animatronics isn't as unconvincing as everyone says, the dialogue matches his facial movements and he looks attractive and stylishly art house. However the people in the film are dull, boring and underdeveloped and are portrayed awfully with even worse performances than the horrible cast of Transformers. I'm certain that the film is likely to dissappoint it's target audience more than any kids movie i've seen in my viewing life. It has quite a few scenes with smoking, swearing and some that I suspect are somehow promoting beastiality to people. But I embraced it for all it's weirdness and art house style of storytelling. I believe it's a surreal, strangely likable and sometimes witty failed picture and it appealed to me. I dont think there's any reasons to loathe it. I had a smile on my face all the way through, I think its a very strange, subversive, funny film. I unlike most most unfair critics actually looked at the positives of the film. So sue me. I enjoyed Howard the Duck.