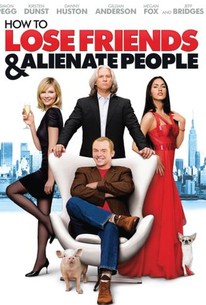 Critics Consensus: A decent performance from Pegg in a disappointing film. Neither sharp nor satirical, Weide's adaptation relies too heavily on slapstick, and misses the point of the source material in the process.

Critics Consensus: A decent performance from Pegg in a disappointing film. Neither sharp nor satirical, Weide's adaptation relies too heavily on slapstick, and misses the point of the source material in the process.

Critic Consensus: A decent performance from Pegg in a disappointing film. Neither sharp nor satirical, Weide's adaptation relies too heavily on slapstick, and misses the point of the source material in the process.

Frequent Curb Your Enthusiasm director Robert B. Weide makes his feature directorial debut with this screen adaptation of British writer Toby Young's comedic novel of the same name. When self-promoting scribe Sidney Young (Simon Pegg) accepts a position as a contributing editor for iconic fashion magazine "Sharps," his subsequent attempts to ingratiate himself with both his egotistical boss, Clayton Harding, and the superficial celebrities who populate the pages of the magazine prove disastrously hilarious. ~ Jason Buchanan, Rovi

News & Interviews for How to Lose Friends & Alienate People

View All How to Lose Friends & Alienate People News

Critic Reviews for How to Lose Friends & Alienate People

Where the movie succeeds is in its sudden right turns, its willingness to kill a dog, always a bold choice, and its consistent emphasis of the comedy over the romance.

Just because you are supposed to laugh doesn't mean you are going to laugh.

Weide bypasses the impulse to push the film at the usual breakneck comedy movie pace, allowing the conflicts to build slowly and with more thought than the film's premise might otherwise suggest.

It plays like a made-for-CBS redo of The Devil Wears Prada.

What was good enough for the printed page -- a comic chronicle of our obsession with the shallow -- has been turned into the object of its own derision.

Instead of skewering self-important stars and vapid journalists, Friends gets muddled in slapstick and crude humor.

This is a fun movie but... it yaps around the ankles of its subject without ever moving in for a decent-sized, satisfying bite.

You'd expect something better from Robert B. Weide.

What we have is a comedy that's not that great, a romance that's not that convincing and a movie that's sadly not that special. Now that's how you lose friends and alienate people.

The makings of an uncompromising, razor sharp satire were gathered together here. That the resulting movie slips off track as much as it does is particularly disappointing.

A fun movie worth checking out.

Audience Reviews for How to Lose Friends & Alienate People

Trying to clear off my DVR, I saw that I had this one there and realized it's one of those movies I've always wanted to watch, but just didn't. So, I finally gave it a shot, and man I wish I would have watched this a few years ago. I love Simon Pegg movies, he is the best geeky/comedy actor out there and I can't think of a real bad movie that he has done. Here he plays Sidney Young, an independent journalist who starts to work for "Sharps", the number one fashion/pop culture magazine. From there he messes everything up, pisses everyone off, and finds out the life he wanted all along, may not be all it's cracked up to be. This has a great supporting cast with Jeff Bridges, Danny Huston, Kirstin Dunst, Megan Fox, and Gillian Anderson. Just wish Nick Frost had popped up somewhere. If your into the "Office" or other Ricky Gervais humor then this is right up your alley. Lot of goofball, uncomfortable situations help make a pretty plain story very funny. Good comedy that flew under the radar that deserves to discovered or rediscovered all over again.

It´s not so bad as I imagined. Let says it works. It has a mix of British and American humour (American "humour") , shows very well Hollywood´s little world and makes lot of references to the great Fellini´s "La Dolce Vita", the best film about the "celebrity journalism" from where, by the way, the word paparazzi comes. *Sophie Maes crossing the swimming pool with La Dolce Vita´s theme song palying in the background is a direct reference to the scene of Sylvia in the Fontana di Trevi. In my opinion, it is better than the original scene.

Kirsten Dunst is the only bright spot in this mess (and even she is not at her best). . Now I know why it took me years to get around to watching it. Stupid storyline and bad acting. And Megan Fox. Ack!

A male vision of The Devil Wears Prada; How to Lose Friends & Alienate People could be not so good made as Frankel's picture, doesn't have a better writing as the same and be very slapstick. But this one had, not just a nice performance by Simon Pegg, it's much more entertaining that The Devil Wears..., and have some funny scenes (unfortunately not some funny as look to be). Anyway Toby Young's adaptation is a nice movie to see. Fresh.