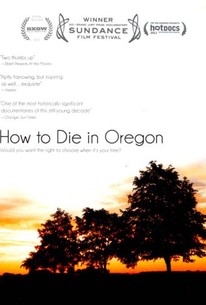 How To Die In Oregon Photos

As medical technology has extended the human life span far beyond what many believed possible only decades ago, a growing number of people face the dilemma of having their lives artificially prolonged beyond a point they regard as necessary or desirable. In 1994, the state of Oregon addressed this issue by enacting the "Death With Dignity Act," which allows terminally ill patients the right to opt for physician-assisted suicide. Filmmaker Peter D. Richardson looks into the philosophical and practical implications of this law in the documentary How To Die In Oregon. Richardson features interviews with journalists, lawyers and physicians as they talk about the efforts to legalize physician-assisted suicide, as well as patients and their families as they struggle with the decision of just when is the time to say they've lived long enough, with a special focus placed on Cody Curtis, a woman in her mid-50s fighting an uphill battle with liver cancer. How To Die In Oregon received its world premiere at the 2011 South by Southwest Film Festival. ~ Mark Deming, Rovi

Critic Reviews for How To Die In Oregon

An affecting profile of the patient aid-in-dying debate.

For a film about death, How to Die in Oregon is awfully life-affirming.

How to Die can be tough to watch, but when it's over, you feel privileged to have taken part.

A sensitive and deeply moving portrait that you won't find easy to shake.

A poignant plea for acceptance of patient aid-in-dying.

All I know is that I cried pretty much all the way through How to Die in Oregon, and that Cody and Robert's final words of "it's so easy" offers me great comfort when I think about that last journey into the abyss.

Make no mistake, this is a difficult film to watch - but it is also a surprisingly uplifting one.

The issue is undoubtedly tricky to contemplate and consider, and this film will both help your thinking and yet also should continue to complicate it for you.

Audience Reviews for How To Die In Oregon

Sometimes witnessing can be much more powerful and transforming than simple words, and I believe that those who position themselves against assisted suicide should definitely watch this humane (and devastating) documentary that raises some necessary discussions about choice and dignity.

While "How to Die in Oregon" is a quietly powerful documentary about an important subject, the idea of dying with dignity, it is also so intense that it is probably not for everyone. That's due to the intimate nature of the documentary itself that eschews the normal safe route of talking heads and experts and instead spends time with those most affected by the new laws which are now in effect in three states. Of special attention is Cody Curtis, 53, a once active mother of two in Oregon, who was diagnosed with cancer after a grapefruit sized tumor was found in her liver and given only months to live. As proof against naysayers and critics, "How to Die in Oregon" shows what dying with dignity is not. It is not perfect as a couple of participants talk about being a burden on their families which is actually what they are there for. And it should surprise no one that an insurance company found a way to exploit the law. Nor is it assisted suicide. Doctors only have to write prescriptions(from $100 to $1,000). As counseled by volunteers from Compassion and Choices, the fatally ill get to choose when they will exit life, not end life(in the words of one participant), and usually in the company of friends and family at home if they so wish. Two questions are asked at the moment of truth: Do you want to change your mind? & What does the medication do? All of which simply reminds us all that death is a natural part of life.

I basically sobbed through a good portion of this, but I don't know how you couldn't. Its not a film that asks any real questions of the audience and I don't think it will change any minds about the "right to die" issue. However it presents unflinching scenarios of painful, ugly death and the prospect of choice and control in death. Its moving without ever being overly sentimental or political.

How To Die In Oregon Quotes