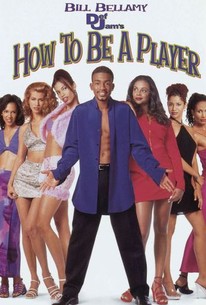 How to Be a Player Photos

When it comes to loving women, Drayton Jackson (Bill Bellamy) is a real player, at least when his girlfriend Lisa (Lark Voorhies) isn't around. He is assisted in his quest for more girls by his buddies Kilo (Jermaine "Big Hugg" Hopkins) and Spootie (A.J. Johnson) and by his love-lorn cousin David (Pierre Edwards). Appalled, but somewhat fascinated by her brother's secret avocation, Dray's sister Jenny (Natalie Desselle) and her sweet girlfriend Katrina (Mari Morrow) decide to study his life-style for their anthropology class. They also start trying to scam him into cleaning up his act by tricking him into attending a special party in Malibu. A low-brow sex comedy aimed at young black audiences.

Gilbert Gottfried
as Tony the Doorman

Jerod Mixon
as Kid No. 1

Jamal Mixon
as Kid No. 2

Critic Reviews for How to Be a Player

I watched the whole movie and am still not a "player." Therefore the film is a failure. Plus it's also pretty awful.

Riddled with misogyny, glorifying slovenliness and brutish behavior, Def Jam's How to Be a Player doesn't even begin to come up with the nasty laughs of a Booty Call or Sprung.

Audience Reviews for How to Be a Player

How to Be a Player Quotes