How Stella Got Her Groove Back1998 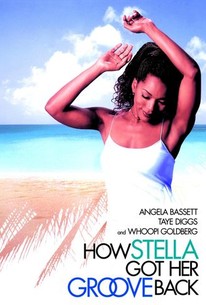 How Stella Got Her Groove Back Photos

Terry McMillan and Ron Bass wrote this screenplay based on McMillan's semi-autobiographical best-selling novel (over 2,000,000 copies in print before the release of this film). San Francisco stockbroker Stella (Angela Bassett), a 40-year-old divorcee, has a nice Marin County home and an 11-year-old son, Quincy (Michael J. Pagan). With Quincy off to see his dad, Stella and her best friend Delilah (Whoopi Goldberg) vacation in Jamaica, where she meets sexy, good-looking Winston Shakespeare (Taye Diggs). He's the man of her dreams in every way except one -- he's half her age. Even so, a romance develops. Grammy Award-winning songwriters Jimmy Jam and Terry Lewis supervised the film's music and produced the R&B-slanted soundtrack album. Shown at the 1998 Urbanworld Film Festival (NY). ~ Bhob Stewart, Rovi

Harold Dawkins
as The Upbeaters Band

Simon Street
as The Upbeaters Band

Steve Danton
as Man in Commercial

Selma McPherson
as Friend at Party

Fern Ward
as Friend at Party
View All

News & Interviews for How Stella Got Her Groove Back

View All How Stella Got Her Groove Back News

Critic Reviews for How Stella Got Her Groove Back

The movie meanders on and on, like a bad sexual dream, until you finally wake up mumbling: Stella, please: leave that groove thang alone.

Stella may be frothy and paper-thin, but it's also another great success for star Angela Bassett, who transforms the film into an infomercial for her considerable abilities.

All formula gloss, a romance that tackles some difficult issues by missing them altogether.

I'm not denying that a 40-year- old woman might be self-conscious about going around with someone this young. But the subject isn't interesting or provocative enough to sustain an entire movie.

The issues that arise from such a May/September male/female pairing are sensitively and intelligently explored.

The timing couldn't be better for How Stella Got Her Groove Back.

The "Groove" is on the move in Sullivan's ethnically snappy and exotic May-December romancer. Bassett and Diggs make for a sizzling couple

There's only one thing missing from this story, and it's the main ingredient: conflict.

Gives Angela Bassett the full star treatment, and she gives it right back.

There is insufficient chemistry, more tension and fighting than romance, and no epiphanal moment to demonstrate that Stella has indeed gotten her groove back.

Stella's groove, like the film itself, doesn't run deep.

Audience Reviews for How Stella Got Her Groove Back

This film is so fake. A shame because actresses like Angela Bassett and Whoopi Goldberg is one of my fav's but too bad they were in this. Such a waste.

Likeable chick-flick that mainly deals with whether a relationship can work around a 20 year age difference. It even chucks in "best friend dying of cancer" half way through but still manages to stay upbeat about it. And it's surprisingly well shot. But I had to remove half a star because there's a desperate rush to the airport at the end.

Great cast about a 40 plus stock broker on vacation in Jamaica.

a movie about angry women

How Stella Got Her Groove Back Quotes