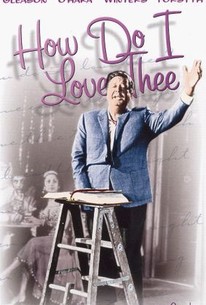 This uneven, sentimental comedy finds a son trying to bridge the generation gap with his father. Stanley (Jackie Gleason) is the cynical and atheistic furniture mover married to the born again Elsie (Maureen O'Hara). Their son Tom (Rick Lenz) is the college philosophy professor who tries to understand his father. The parents take a trip to France for Stanley's health, and the concerned Tom soon follows. Stanley tries to have an affair with the bohemian artist Lena (Shelley Winters), but the two never get the chance. She leaves him with a poem he believes she wrote for him. Tom turns the poem in to a contest committee and Stanley wins the $10,000 prize. The poem turns out to be an Elizabeth Browning original, and Tom is passed up for a much deserved promotion. Stanley goes to church and prays for Tom to get the promotion. He is upset when the professor who gets the promotion over his son dies, but Tom assures him the man expired before he enter the church and asked for divine intervention. Tom ends up marrying on of his beautiful students (Rosemary Forsythe) in this story from the Peter DeVries novel "Let Me Count The Ways."

Clinton Robinson
as Tom as a Boy

Frank Logan
as Frank, the Bartender
View All

Critic Reviews for How Do I Love Thee?

There are no critic reviews yet for How Do I Love Thee?. Keep checking Rotten Tomatoes for updates!

There are no featured reviews for How Do I Love Thee? at this time.

How Do I Love Thee? Quotes