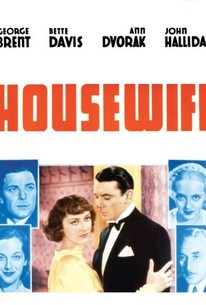 In this drama, a seductive business associate of a married man allows him to claim her brilliant idea for an ad-campaign in exchange for the resumption of their romance. The campaign is a great success and establishes the man's newly formed ad-agency. He is not unhappy to become her lover again. He is just about to throw his wife over for the other woman when he hears her makes some cruel remarks about his wife. This makes him realize that he still loves his spouse; it is then that he remembers that it was she who inspired him to try to make it on his own. He humbly returns to her.

Phil Regan
as Hathaway, the Crooner

Charles Coleman
as Bolton
View All

Trite, but has been exceptionally well handled.

There are no featured audience reviews yet. Click the link below to see what others say about Housewife!