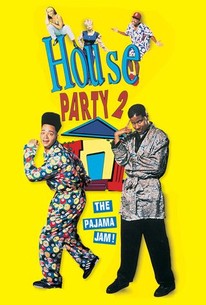 Robin Harris, Christopher Reid's foul-mouthed and irascible father from the original House Party film, died in the interim, but he has a university named after him in this follow-the-dots sequel. Kid (Christopher Reid) has finally made it to college in House Party 2, but not without problems. Sent to Harris University on a scholarship check given to him by his local church congregation, he finds himself broke before he can even buy the books for his college courses. He can thank his old pal Play (Christopher Martin) for his financial straits, since Play borrowed the money to pay a phony music producer named Shelia (Iman), who has headed off to parts unknown. Kid tries to pay for tuition by working in the college cafeteria but is thrown out because he is not considered a student. Problems compound when his girlfriend Sidney (Tisha Campbell) spends more time studying than with him. He also receives lectures on political correctness from her strident roommate Zora (Queen Latifah). Still, Kid's main concern is finding the money for college. Finally Kid agrees to go along with Play's scheme -- to hold a surreptitious late-night pajama party in the faculty hall to raise funds to pay for Kid's education. ~ Paul Brenner, Rovi

House Party 2 is a genial and good-humored sequel to the surprise 1990 hit, but not much more.

It's preachy, melodramatic, and takes itself way too seriously...

Uninspired follow-up to the original comedy

A huge step down from the original; a huge improvement over Part 3.

Well this time it's college time. Queen Latifah was a nice addtion in this crazy sequel. This time it's a Pajama party.

An ok sequel. I liked the first one better but this one still had the funny and continued the story of these two friends out to have a good time.