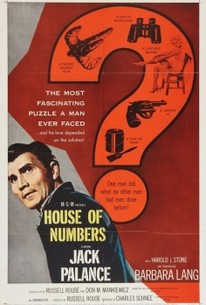 House of Numbers might have worked better as a farce comedy than a deadly serious melodrama, but everyone involved tries hard not to raise a chuckle. Jack Palance plays a dual role, as an imprisoned gangster and the gangster's twin brother. During a visit to the gangster, the brother switches places, allowing himself to be incarcerated as the real criminal walks free. The scheme involves the complete cooperation of Barbara Lang, wife of one of the Palance boys, who expectedly wavers in her loyalties. Based on a novel by Jack Finney, House of Numbers strived for realism by staging several scenes on location at San Quentin. ~ Hal Erickson, Rovi

Critic Reviews for House of Numbers

This prison drama is more convincing than usual in its portrayal of life behind bars. Its story, however, is cluttered and confusing.

There are no featured reviews for House of Numbers at this time.