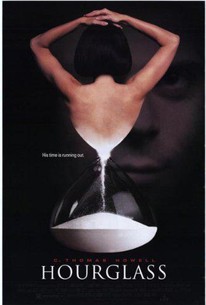 C. Thomas Howell made his directorial debut in this suspense thriller, in which he also stars as Michael Jardine, a successful fashion designer. When Jardine's wife drowns under mysterious circumstances, he finds himself the key suspect in the murder investigation led by police detective Cecil Dish (Ed Begley Jr.). Meanwhile, Jardine falls into a destructive relationship with obsessive fashion model Dara Jensen (Sofia Shinas). Adding to Jardine's crises is a potential hostile takeover of his company by a rival firm that is marked by threats of blackmail and violence. In what was undoubtedly a great project for red-headed comic actors, the supporting cast also includes Don Most (known as "Donny" when he played Ralph Malph on Happy Days) and Scott "Carrot Top" Thompson.

Don Most
as Andre

There are no critic reviews yet for Hourglass. Keep checking Rotten Tomatoes for updates!

There are no featured reviews for Hourglass at this time.