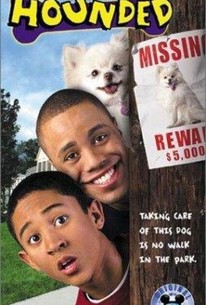 Directed by Neal Israel, Hounded is a made-for-television family film about a 13-year-old boy named Jay Martin who has both a school paper and his chances for a scholarship stolen by his rival, Ronny Van Dusen, who just so happens to be the headmaster's son. Jay concocts a plan to right the situation, but when he breaks into the headmaster's house, he can't stop the Van Dusen's dog from following him home. As if that weren't enough, without the proper medication, the dog gets completely out of control. The film originally aired in 2001 and stars Tahj Mowry as Jay, Shia LaBeouf as Ronny, and Ed Begley Jr. as Mr. Van Dusen.

Just an incredibly weird and campy movie about dog stealing. About the only noteworthy aspect is the fact that Shia Labeouf plays a hilariously evil rich kid. However, most of the time you're just left wondering why Tahj Mowry has a career outside Smart Guy. He's essentially the same character, but slightly dumber.