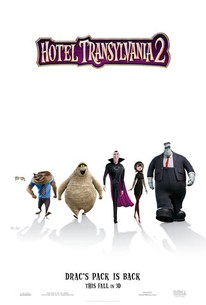 Critics Consensus: Hotel Transylvania 2 is marginally better than the original, which may or may not be enough of a recommendation to watch 89 minutes of corny, colorfully animated gags from Adam Sandler and company.

Critics Consensus: Hotel Transylvania 2 is marginally better than the original, which may or may not be enough of a recommendation to watch 89 minutes of corny, colorfully animated gags from Adam Sandler and company.

Critic Consensus: Hotel Transylvania 2 is marginally better than the original, which may or may not be enough of a recommendation to watch 89 minutes of corny, colorfully animated gags from Adam Sandler and company.

The hit CG-animated family comedy Hotel Transylvania gets a follow-up with this Sony Pictures Animation production.

Jon Lovitz
as Phantom of the Opera

VES Awards 2016 Winners Announced
Parental Guidance: How Family-Friendly Are Ride Along 2 and Norm of the North?
Visual Effects Society: The Force Awakens Leads the 2016 Nominations

Kids are not likely to get the jokes about Gary Oldman​'s wig in the 1992 film Dracula, nor sympathise closely with the emotional difficulties Drac faces in becoming a grandparent. Adults... will have seen virtually all of this before.

Like the first entry in this animated Sony Pictures franchise, the film is spirited, engaging, and has an idea: it's about mutual tensions between the undead and the living, who have forged a truce up in the Carpathians.

An engaging and sometimes witty coming-of-age story, it is a patch above some of Sandler's recent live-action films.

"Hotel Transylvania 2" is an unfortunate throwback to about 20 years ago, when animated movies were more widely accepted as cinematic babysitters.

It stays on safe ground at all times trusting that what has already been successful once will be accomplished again. In exchange, it is more fun and with a more effective structure. [Full Review in Spanish]

Overall Hotel Transylvania 2 is not that great and not terrible either.

Have some laughs and enjoy a moderately entertaining animated film. Nothing more, nothing less.

We're taken it upon ourselves to warn travelers that this hotel has become the sort of soulless castle Dracula fears.

A modestly charming sequel that's also the best thing Sandler has lent his name to in some time.

It's nowhere near as stimulating and intellectual as a Pixar offering, but nowhere near as stupidly offensive as some of the atrocious crap that flood the animated genre simply because some parents will take their children to see anything

The characters and the animation may be pretty amusing for kids, the story (will the grandchild turn out to be a monster or can it be raised as one?) might be a bit over their heads, though. There are amusing moments, but hardly any laugh out loud ones and one has to wonder why every animated film lately has to end with the entire cast dancing. Entertaining and nicely animated, but overall mostly for fans.

See more reviews like this at chrisbreviews.blogspot.com Like many sequels, Sandler and director Genndy Tartakovsky have run out of ideas for the plot and their priorities now seem to have shifted to maintaining the series for as long as possible, with a third film on the way in 2018. Young audiences will enjoy the fantastic animation, minor action sequences, and visual displays accompanied with light humour; especially absurd and slapstick. Adults will be mostly bored by the dragging plot but mildly entertained by the inconsistent humorous scenes and relatable themes. Such themes include familial acceptance, destiny, and expectations. All of which, to Sandler's credit, are important issues and topics to educate children on at an early age, and moreover to allow parents to reflect upon. This would have been the shining aspect of this film if it were not for the obvious contradiction toward it at the climax of the film. Sandler has hired many of his fellow renowned comedians and actors in a desperate plea to increase the film's credibility including himself (Dracula), Selena Gomez (Mavis), Andy Samberg (Johny), Kevin James (Frankenstein), Mel Brooks (Vlad), and David Spade (Jack) among others, even employing Fifth Harmony and Flo Rida for the movie's soundtrack. Many of the characters are one-dimensional and are only in the film for the gags. Some genres attempted to be intertwined are comedy, action, adventure, animation, and family. Elements of various genres are poorly demonstrated which takes a toll on the movies overall quality. Overall, Hotel Transylvania 2 is a very generic animation with more negative than positive aspects. Nevertheless, it is a children's film and should source some mild entertainment from them, albeit it is hardly a memorable film that will be remembered as a piece of one's childhood in future years.

Strictly for kids, make 'em about toddler age (any older and they'll kill you). Groanworthy jokes. Barely adequate animation. And over an hour of Sandler's "what difference does it make, those fools don't know any better" Bela Lugosi stylings. Is there a bottle of vino somewhere? Now's the time to get it. Drink it and use the bottle on Sandler's head, disrespect him like he's dissing you. Or there's that lawn work you've been putting off ...