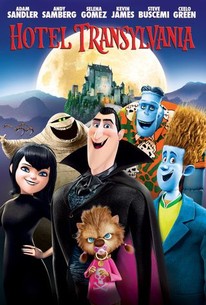 Critics Consensus: Hotel Transylvania's buoyant, giddy tone may please children, but it might be a little too loud and thinly-scripted for older audiences.

Critics Consensus: Hotel Transylvania's buoyant, giddy tone may please children, but it might be a little too loud and thinly-scripted for older audiences.

Critic Consensus: Hotel Transylvania's buoyant, giddy tone may please children, but it might be a little too loud and thinly-scripted for older audiences.

Welcome to the Hotel Transylvania, Dracula's (Adam Sandler) lavish five-stake resort, where monsters and their families can live it up, free to be the monsters they are without humans to bother them. On one special weekend, Dracula has invited some of the world's most famous monsters--Frankenstein and his bride, the Mummy, the Invisible Man, a family of werewolves, and more--to celebrate his daughter Mavis's 118th birthday. For Drac, catering to all of these legendary monsters is no problem--but his world could come crashing down when one ordinary guy stumbles on the hotel and takes a shine to Mavis. -- (C) Sony

Cee-Lo Green
as Murray the Mummy

Brian George
as Suit of Armor

Craig Kellman
as Hydra/Guy in Crowd

David Koechner
as Quasimodo
View All

Comedy gothic isn't exactly novel, and frankly there is a sense here of a movie coasting along on Halloween hype-marketing, without providing as many laughs and ideas as it really could have done.

No one does saccharine like Adam Sandler. The man can be sharp, angry and funny - but when he lays on the sweetness, it's like drowning in an avalanche of Tate & Lyle.

The film gives gothic multiculturalism a good, or at least a giddily digimated, name.

Somehow dull and exhausting all at once, and the central concept (monsters who fear humans) was explored with far more wit and elegance in Pixar's timeless Monsters, Inc.

It's all strictly one-note stuff. But it's a funny note, and the film has a grand old time giving us the same type of gag over and over again.

The way this collection of monster misfits tackle both each other and the threat of human invasion has the right degree of wit and sophistication to amuse adults whilst being zany and slapstick enough to hold children's attention.

As a straight up monster movie, this film could have had a lot of fun diving further into the stereotypes... and then extending the confrontation that occurs at the end. Instead it's weighed down by the teen romance and need to conceal Jonathan.

The movie is hardly top-notch stuff.

This 91-minute mash-up of Halloween creatures and non-stop silliness hits the ground running and virtually never slows down.

This year is really a good year for spooky Addams Family style halloween goth freaks like myself. So far we've had 'ParaNorman' 'Frankenweenie' and now this Adam Sandler animated vehicle. Yes that's right...Adam 'I'm not funny anymore' Sandler. About 10 minutes into this film you can tell its clearly been made for kids. Nothing wrong with that of course but this isn't Toy Story-smart with little winks for the older folk, its way more tuned for the younglings. This is very evident with silly jokes, huge prat falls and a very loud in your face approach much like many kiddie cartoons, dare I say childish to the max. Yes childish but did I expect more? well maybe yes, an Adam Sandler fronted film? I did think it might be a little more risky in places, or even a tad scary judging by the concept. The best thing about the film in many sequences is the dialog from the brilliant voice cast line up. This is what the adults will enjoy, especially with the dry wit of Spade and Buscemi who give Werewolf and The Invisible Man some cracking moments of verbal humour. Naturally Kevin James is in here too, can't have an Adam Sandler film without his tubby sidekick it seems. There was a time when it was Rob Schneider, not anymore. The animation was split right down the middle for me to be honest, at times some sequences looked fantastic, where as others looked rather uninspired. The flashback sequences for Dracula were especially lovely with stunning colours, and the best animated motion capture was again easily Dracula. Some gorgeous looking work as we see Drac glide across the hallways, flap and twirl is cape, slink amongst the shadows and sail through the air...its all in the cape work. Other characters are well designed too, I like the blue collar look of Werewolf, the obvious simplicity of The Invisible Man, the gigantic foot of I presume a Yeti and Mummy, who looked a lot like Oogie Boogie from 'The Nightmare Before Christmas'. There are an impressive range of monsters shown throughout the film from standard skeletons to a Pumpkin King-esque character. The main characters are the best looking naturally, where as the rest don't seem quite as well crafted. I must just add, is it wrong that I found the young female character of Mavis (Drac's daughter) kinda hot? I mean look at it from my point of view, I'm into the whole goth look and vibe. So for me the sight of an attractive slim pale female with black lips, dark eye shadow, black fingernails and raven black hair, wearing a surprisingly sexy tight black number complete with arm stockings was really quite sexy. It was like watching a young animated Winona Ryder...rawr!! But I digress, the film is a simple love tale between Mavis and a random human lad who turns up at the hotel, nothing more. Its very sweet, very charming and will thrill the kids. I did enjoy it mainly for the monster mash aspect and of course the kooky vampire/haunted mansion side of it (if you haven't already guessed). The animation in general was a slight let down for me (some characters aside) as I did expect something a bit more original, quirky or diverse from director Geddy Tartakovsky. It all looks good but too generic for me, nothing trailblazing like his Star Wars work. Also I was hoping for something a little more adult orientated in places with the monsters but alas. Jokes are a bit forced, hated the pop songs included and the horrendous ending almost ruins the entire film Jesus! but it still just about made me smile. Not as unique, amusing or moving as 'ParaNorman', so far that is the front runner for fun halloween flicks. Watch out for Geddy's unique and much better hand drawn animation in the end credits, maybe they should have done the whole film this way?

Hotel Transylvania was a cute cartoon. I enjoyed all of the different characters. It had some laughs. Of course Adam brought in a lot of his friends to do the voices for the characters. I didn't mind it so much this time since I didn't have to see them. My nieces and nephews really enjoyed it and said that the movie was really good and is now one of their favorites. So I guess all that matters is that the kids love it since it is, in the end, intended for the children.

The first half was lame, the last half seemed to pick up. But, it still wasn't as good as I had expected it to be. Ok, just not great...

I was very wary about this project. It starred a bunch of voice actors that have generally outstayed their welcome, and at the same time it is directed by an animation genius. What transpired is a rather mixed affair but for the first half I was totally entranced and laughing heartily at the visual humour and pretty clever jokes. The film has Dracula building a hotel for all his monster buddies to escape persecution. He also uses it to shield his daughter away from the outside world, but when a human shows up unexpectedly, things begin to change. Tartakovsky has a real eye for detail, which allows many funny goings on in the background. The voice work was also well suited, with even Kevin James and David Spade providing good performances, although Samberg's attempts to sound like your average 21 year old backpacker was a bit annoying and unconvincing. However, I can't really remember the second half of the film, which is odd because I was enjoying it so much. I guess it was just bland and formulaic after a while. Most annoying of all was the film failing to live by its rules, where we could have seen an emotional and painful moment for Dracula, instead he can just be in the sun for as long as he likes. Play by your own damn rules film.