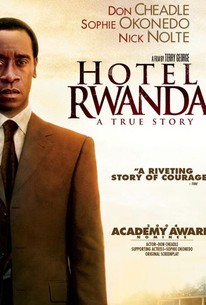 Critics Consensus: A sobering and heartfelt tale about massacre that took place in Rwanda while most of the world looked away.

Critics Consensus: A sobering and heartfelt tale about massacre that took place in Rwanda while most of the world looked away.

Critic Consensus: A sobering and heartfelt tale about massacre that took place in Rwanda while most of the world looked away.

Ten years ago some of the worst atrocities in the history of mankind took place in the country of Rwanda--and in an era of high-speed communication and round the clock news, the events went almost unnoticed by the rest of the world. In only three months, one million people were brutally murdered. In the face of these unspeakable actions, inspired by his love for his family, an ordinary man summons extraordinary courage to save the lives of over a thousand helpless refugees, by granting them shelter in the hotel he manages.

Lebo Mashile
as Odette
View All

100 Fresh Movies You Can Watch for Free Online Right Now
Now Streaming: Boogie Nights, American Horror Story, The Back to the Future Trilogy, And A Lot More

Cheadle, in his richest role since Devil in a Blue Dress, burrows deep inside this complex man, who discovers in himself a strength he never knew he possessed as he faces the disillusion of all the "civilized" notions he believes in.

There's a tidiness and sense of convenience in the film's stock characterisations and button-pushing plotting that detracts from its impact. The film doesn't just contrive to contain the slaughter, but also its own anger.

Cheadle has an Oscar nomination for best actor. But this isn't a grandstanding portrayal: it is a performance at the service of the work.

Showing traces of the well-meaning paternalism that dogs many Western films about Africa, Hotel Rwanda doesn't go far enough in indicting Europeans and Americans for protecting their own while failing to intervene in time to stop the mass killings.

The emotion comes from Don Cheadle's thrilling portrait of ordinary heroism, a performance that's matched only by the magnificent Sophie Okonedo as his wife Tatiana.

Move past the big picture, of race hatred, arbitrary maps and guilt over what the UN and the West can't or won't do, and find the human story within the inhumanity of war.

Remarkably, the director Terry George and his co-writer Keir Pearson have pulled it off, rooting the big picture of anonymous murder in one small precise close-up.

Like "Schindler's List," "Hotel Rwanda" shows how the madness of genocide and war converted one man's context of wealth and success from capitalism to humanitarianism. Don Cheadle honors Paul Rusesabagina by tapping his brave face and internal rage.

potentially fantastic material...unfortunately, [Terry] George's attempt is too mired in movie-of-the-week sensibilities...to do any justice to its subject matter

This is a solid film, but it is the truth that holds the power, not the direction.

The film belongs to Don Cheadle as Paul and, not surprisingly, he walks away with it.

The film is powerful and moving, but that's got more to do with knowing the horrible events actually took place -- not because of anything special about the film making (other than possibly Cheadle's understated Paul). Cheadle's acting was exceptional, and everyone else was good with the notable exception of Nolte who played his role as if he were a caricature of a gruff-but-lovable military careerist. It's worth seeing to remind yourself that this genocide really happened and the rest of the world really didn't care that much.

During the early nineties there was an infinite increase in genocide, very prevalent in Africa. The killing in Rwanda was based on a class system that had been in place for decades, and now that the power structure was switched, the tribal system emerged, lending to a million deaths in one year at the hands of a vast military. This film tells the condensed story of a hotel manager named Paul Rusesabagina, who lived the life of a middle class suburbanite while surrounded by soldiers and misplaced nationalism. Prompted by the assassination of Rwanda's president and the expedition of the UN Peacekeepers, Rusesabagina takes in 1,200 refugees and saves all their lives in the process. Rusesabagina starts out as a tolerant and possibly naive citizen, unbelieving of the errant violence of soldiers, or the collapse of his government. With his vast knowledge and Belgian education he outwits, cons, and pleads with generals and soldiers alike to spare his "guests" lives, all while saying it was in keeping with his occupation at the hotel. Pretending they are part of the luxurious clientele, and using his knowledge of the atrocities around his country, he often keeps his offenders at bay, takes in orphans, and saves his family. This has been compared to "Schindler's List" in terms of a savior taking in people to save them from certain death. That comparison seems apt since Rusesabagina starts the film as an affluent and privileged individual with a skewed, or incorrect, view of his surroundings, much like Schindler starting the film as a Nazi. Rusesabagina immediately softens to the refugees' plights and bribes everyone he can in order to save their lives. This film has also been criticized for not covering the entire genocide and instead focuses on a small contingent of people. Comparing again to "Schindler's List," it's evident that that film did cover more, including camps, the train, and the conditions that Jews lived under, and in this film we very often do not see violence, bloodshed, or hateful intolerance. For what the film covers, I think it appropriately shows the devastation done to its citizens, and though not as effective when it comes to bluntly showing death at every turn, there are bodies in the streets, corpses of children left and piled in unceremonious mounds. The film also appropriately covers the lack of intervention from the UN or the US during this time of tumult, and how horrific that truth was when it dawned on the survivors in the hotel. That especially lent a lot of realism to the story, and downplayed the heroism of outsiders, since they weren't there for the bulk of the travesty anyway. That in itself speaks about the genocide more than showing blood spurts from bullet wounds. Overall this film is still disturbing and moving as it shows the sacrifices and travesty of these horrific crimes against humanity.

Like The Killing Fields, Salvador and Schindler's List before it, Hotel Rwanda catalogues yet another example of the human race's remarkable talent for inhumanity. Don Cheadle gives a career best performance as a hotel manager who uses all his intelligence and guile to help save over 1200 refugees from the genocidal rampage of Hutu militants. The rest of the cast also put in the kind of committed performances actors give when they truly believe that a story must be told and although it is a little manipulative, it's never heavy handed or clumsy. I must admit, I didn't realise that the cultural segregation of the Tutsis and the Hutus was just an arbitrary division created by long gone occupying colonialism and the film gives a welcome lesson in the cause and nature of the conflict. It also serves as yet another reminder that the opulent west is very good at making worthy popular entertainment that documents such atrocities, even shedding a tear when reminded of their existence. But we never seem to do a damn thing when it actually counts.

The backstory here is genocide ... one hell of a place to start and an lmmersion into reality usually reserved for documentarys with grainy, out-of-focus footage. But the mainstory here, in glorious cinematic values, is a true action tale about one man's determination only for decency, humanity, when the world around him contradicts. Kudos to writer/director Terry George for revealing a side of humanity nobody likes, yet exists nonetheless, and to Don Cheadle's steady portrayal of an everyman in extraordinary times.