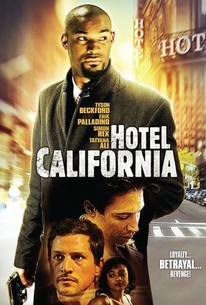 Three Los Angeles criminals and a spurned lover team up to seek revenge against the criminal that betrayed them all before fleeing to Miami in this crime thriller starring Tyson Beckford and Simon Rex. When Troy (Erik Palladino) calls his old partners Al (Beckford) and Pete (Rex) to announce that he's back in L.A., the pair immediately relay the news to their boss Dmitri (Raymond J. Barry), one of the city's most feared criminal kingpins. Troy claims he's turned over a new leaf, but when he starts talking about a new scheme, it becomes obvious to everyone involved that he's the same old con artist he's always been. As tensions start to heat up, Al, Pete, Dmitri, and Jessie (Tatyana Ali) all join forces to exact bitter revenge against the man who thought he could just waltz back to town without atoning for his previous transgressions.

There are no critic reviews yet for Hotel California. Keep checking Rotten Tomatoes for updates!

There are no featured reviews for Hotel California at this time.