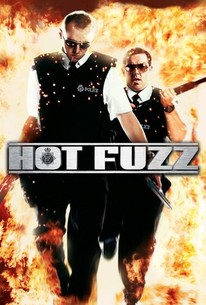 Critics Consensus: The brilliant minds behind Shaun of the Dead successfully take a shot at the buddy cop genre with Hot Fuzz. The result is a bitingly satiric and hugely entertaining parody.

Critics Consensus: The brilliant minds behind Shaun of the Dead successfully take a shot at the buddy cop genre with Hot Fuzz. The result is a bitingly satiric and hugely entertaining parody.

Critic Consensus: The brilliant minds behind Shaun of the Dead successfully take a shot at the buddy cop genre with Hot Fuzz. The result is a bitingly satiric and hugely entertaining parody.

A top London cop who is so good at his job that he makes his fellow officers look like slackers by comparison is "promoted" to serve in the sleepy village of Sandford in this contemporary action comedy from the creators of Shaun of the Dead. Police constable Nicholas Angel (Simon Pegg) always gets his man, but these days his impeccable record seems to be more indicative of his fellow officers' shortcomings than his own formidable skills as a keeper of the peace. Loathe to stand idly by as their once respectable track record is steadily soiled by the hyper-competent actions of one lone overachiever, Sergeant Angel's superiors at the Met soon determine to remedy their problem by relocating the decorated constable to the West Country village of Sanford -- where tranquil garden parties and neighborhood watch meetings stand in stark contrast to the violent crime and heated gunplay of the city. As Sergeant Angel does his best to adjust to the relative calm of his new environment, his oafish new partner Danny Butterman (Nick Frost) strives to gain the respect of his fellow constables while sustaining himself on fantasies of his favorite action films and police shows. Later, just as it begins to appear as if Sergeant Angel has been relegated to an uneventful existence in the relative calm of the countryside, a series of horrific "accidents" lead him to suspect that the tranquil hamlet of Sanford has fallen prey to a sinister plot which reeks of foul play. Jim Broadbent, Timothy Dalton, Steve Coogan, and Martin Freeman co-star in the Edgar Wright film. ~ Jason Buchanan, Rovi

Robert Popper
as `Not' Janine

Alexander King
as Aaron A. Aaronson

Graham Low
as The Living Statue

Rory Lowings
as Underage Drinker No. 3

Troy Woollan
as Underage Drinker No. 2
View All

It's such a vibrant goof, so full of love both for the movies and for its cast of ridiculous characters that you forgive it the odd soggy stretch.

Wright and Pegg have topped Shaun of the Dead by trans(atlantic)planting a whole gaggle of genres.

The movie duly quickens into pursuits of every speed, and the homage to action thrillers is there in the smallest detail; the clicking of a ballpoint pen, say, is amplified to sound as menacing as the cocking of a gun.

Hot Fuzz is everything an action-comedy should be. It achieves through parody what most films in the genre can't accomplish straight.

Because this culture-clash comedy has real characters, a real story and a real big payoff, the two-hour length is a light sentence.

Though it's no Monty Python, Hot Fuzz is a clever, over-the-top marriage of mayhem and merriment.

A literate deconstruction of action movie tropes, while also being intelligent enough to actually offer a passable genre movie in the process.

Wright understands how to perfectly balance action, comedy, drama, and suspense, and it pays off.

It's a perfect spoof of the once popular action genre, that's highlighted by the chemistry of Pegg and Frost.

Manages to find humor not just in the mundane existence of a small town but also in the overblown nature of action films. And, it works as an action movie on its own.

Hot Fuzz, Edgar Wright's follow-up to his extremely popular zombie satire Shaun of the Dead (2004), improves on the latter's strong points in every conceivable way while drastically tightening up its weakest elements.

After their zombie parody, the people behind "Shaun of the dead" are now making fun of police and action films. Packed with great British actors down to the smallest roles the film easily takes on all stereotypes and throws them into the mix. The seriousness of Simon Pegg's main character makes it all even funnier, the gory murder effects are hilariously over the top. And although the solution to the murder cases he has to solve is rather silly, the following action showdown is unbelievable. If you ever hoped to see a gun holding grandma getting drop kicked, this is your chance. It's also fun to see how many cinematic quotes from the genre you can find. Silly yet highly entertaining.

With a fantastic direction and Oscar-worthy editing, it boasts a brilliant script that combines hilarious comedy, exhilarating action and clever thriller while paying an incredible attention to the smallest details - though too restrained with violence in its climax.

Not as good as Shaun of the Dead but decent fun.