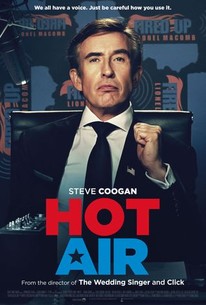 For twenty years, Lionel Macomb (Steve Coogan) has been the reigning king of conservative talk radio, delighting his fans and enraging his opponents with his angry charisma and caustic wit. Lionel spends his days ranting about hot button issues from health care to immigration, shaping the shouted debates of a divided nation. And millions listen.Now Lionel is at a crossroads. He seems bent on sabotaging his relationship with Valerie Gannon (Neve Campbell). He's in a ratings war with his former protégé, Gareth Whitley (Skylar Astin), who has re-branded himself as the kinder, gentler voice of the right wing. He's embroiled in a public spat with a powerful senator (Judith Light). He's in danger of fading into irrelevance.When Lionel's sixteen-year-old niece Tess (Taylor Russell) shows up seeking his help with a family crisis, Lionel must confront the complicated family he's long since left behind. In Tess, Lionel has finally met his match: a smart, determined, brazenly honest sparring partner. Tess is facing her own dilemma, a stark choice between supporting her troubled mother (Tina Benko) or embarking on a life-changing opportunity she's worked so hard to earn. As this unexpected bond develops, and his career crisis reaches a breaking point, Lionel must decide whether to rethink the power of his words and his legacy. Will he open himself up to a new kind of responsibility and connection? Or will he stay his fiery course, burning anyone who gets too close?

Ready or Not Is Certified Fresh

Director Frank Coraci and screenwriter Will Reichel have made a movie that aims to bridge some of American's current social divides but is so focused on its destination that not much of note happens during the journey.

However hopeful Hot Air is, its phoniness makes the prospect of an open-minded debate feel even more like a fantasy.

Coogan gets some big scenes, but anyone familiar with what this actor is capable of may wonder why he was cast in the first place.

Neither funny, insightful nor moving, it's mostly objectionable for its failure to exploit the facets of Coogan's screen persona that line up so neatly with the smug blatherers who dominate the AM dial.

Predictable, artless fare at its core, yet also disappointingly toothless.

Even with its sappiness, Hot Air is about family sticking together and finding forgiveness. It a breath of fresh air over the typical a one-sided partisan film.

There isn't an unpredictable moment in this film, but director Frank Coraci is experienced at keeping the pace brisk while making unlikeable characters engaging.

A film that begins as a topical expose of polarizing media personalities eventually succumbs to predictably sentimental clichés.

Coogan is actually quite effective as Lionel, while young Russell offers a charismatic and watchable presence. Problem is, Hot Air lacks a point of view.

Hot Air falls quite a bit short of its maximum potential in the political climate for satire especially with having a focus on conservative talk radio.

Danielle Solzman
Solzy at the Movies
View All Critic Reviews (17)

There are no featured reviews for Hot Air at this time.