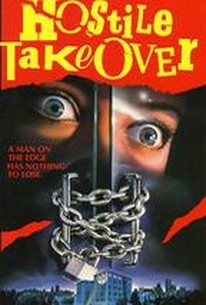 Michael A. Gilbert's Office Party was the basis for the Canadian thriller Hostile Takeover (it also bears traces of "Wall to Wall War", an episode of the 1963 TV anthology The Richard Boone Show). David Warner plays a mild-mannered office worker who one morning kicks over protocol and pulls a gun, taking his co-workers hostage. It isn't that Warner is rebelling against a society that has kicked him around all his life, nor has he any beef against the company. It's just that he wants to be totally in control of a situation, a thrill he has never previously experienced. More than likely, the hostage situation could be resolved peaceably, but gonzo mayor John Vernon, jockeying for votes, insists that Warner be neutralized by a SWAT team. As these plans are formulated on the outside, Warner becomes obsessed with his new power, forcing his captives to humiliate themselves in various ways. This, in turns, leads to a breakdown in inhibitions amongst the workers--and an impromptu "group therapy" session! From this point on, dear reader, you're on your own: nothing that follows in Hostile Takeover is what one expects to happen, so henceforth we'll keep mum. ~ Hal Erickson, Rovi

Will Lyman
as Smolen

Rex Hagon
as V.P. of Felton
View All

There are no critic reviews yet for Hostile Takeover. Keep checking Rotten Tomatoes for updates!

There are no featured reviews for Hostile Takeover at this time.