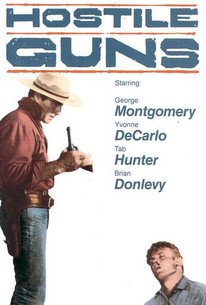 U.S. Marshal Gid McCool (George Montgomery) leads a wagon train of convicted felons to Huntsville prison in this routine western. The only female among the crooks is the dancehall girl Laura Mannon (Yvonne De Carlo), McCool's former flame. When McCool cannot be swayed from completing his lawful duty, Laura tries to endear herself to shotgun rider Mike Reno (Tab Hunter) in hopes he will set her free. The party is shadowed by some outlaws led by Aaron (John Russell), the brother of one of the condemned murderers, in hopes he can free his doomed sibling. Mike's efforts land him in chains, but McCool releases him to fight when the outlaws attack. The hero McCool comes through with only a slight scratch while his adversaries are all beaten to a bloody pulp. Silent movie star Francis X. Bushman was to have appeared in this film, but died in August 1966. His part was taken over by Donald "Red" Barry.

There are no featured reviews for Hostile Guns at this time.