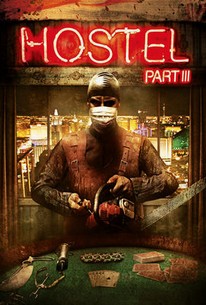 More vacationers are tortured for a fee in this third installment of the Hostel film series, this time being steered by director Scott Spiegel (Intruder) and writer Michael D. Weiss. Franchise creator Eli Roth returns to handle producing duties.

I really was pleasantly surprised with this film. It was funny, it was gory, it had great twists, and it updated an old storyline in a genius way.

Knows how to deliver some familiar goods, sprinkled with just enough "new stuff" to keep the horror hounds from feeling insulted.

An awful and mean-spirited sequel...

Not quite as disturbing as the first two films, or as metaphorically fascinating, but full of clever twists and turns. Hostel Part III is a better-than-average low-budget thriller.

Quick, fun, and blissfully brutal, it stands head and shoulders above the usual direct-to-video sequels that are shoved down our throats at a steady pace.

Sequels are never good, this appears to continue the franchise for the sake of trying to be shocking.

Hostel 3 is a pretty decent horror yarn that is actually better than the lacking part 2, which only relied on the first film for its ideas. At least this third film by Intruder director Scott Spiegel offers something refreshing and interesting for fans of the original Hostel. With an entirely different setting, and new ideas at hand, the filmmakers were able to craft a respectable third chapter in this series of torture porn horror flicks. The film has plenty of flaws, such as questionable dialogue and performances, but it delivers in its ideas that director Spiegel tries to convey. There are some good ideas at work, but most of the time, it leaves a lot to be desired, and it could have been done a bit better. Despite the flaws, there's lots of thing to please gorehonds, as this is first and foremost, a splatter, torture flick, which has lots of juicy kill scenes and it does that very well. The script has its limitations, but most of the time, the film just relies on its concept to deliver its entertainment, and sometimes, that's all that is necessary to create the memorable, disturbing moments. If you were disappointed by part 2, then this third film should definitely appeal to you. I really liked the fact that it was set in Las Vegas and that clients could place bets on how the executioners would kill off the victim. I felt it was very twisted and it was what made the film overcome its flaws and be amusing. Nonetheless, Hostel 3 is not a perfect film, and it so much potential of being a better film, however there's still plenty of effective gore elements to make this a film worth seeing.

I actually liked it. I like all the Hostel movies, so shut up. This Hostel movie kind of deviated from the plot of the last 2 movies. The last two movies were more gory and violent. Hostel 3 was not at all as gory as I expected. The last two movies started out as college kids or people from out of town being abducted and taken to the Hostel where they were slowly tortured for money. Hostel 3 is a bit of a twist and I actually really liked it. *SPOILER* In Hostel 3 the casino is like the Hostel and the people in the casino get to bet on how they think the guy is going to kill the victim and they can bet on what the victim is going to say/do. I thought it was kind of creative....but different. I didn't really like that it was different from the rest of the movies, but it was a nice twist. I also liked the many, many twists in the film. Every time you thought the film was over, it wasn't. And every time you thought something bad was going to happen, it didn't. It was well thought out. It wasn't like a shitty plot. There were actual plot points that made the movie go in a bunch of different directions. There were actually A LOT of plot points. In my screenwriting class my teacher was always like "where's the twist in your story? where are your plot points?" well I bet if I had as many plot points as this film I would've gotten a better grade in that class. There was even a deeper story to this one. It was like a bachelor party/revenge scheme it was pretty interesting. I'm not saying this movie was super amazing- it definitely was not. The SFX were definitely the worst of the 3 films, and the script needed some work for sure. Those awful one liners were definitely not as frequent in the last 2 movies. I just like how the director put a creative twist onto the Hostel movies. It was a daring move making a sequel to and not sticking to the same formula as the previous Hostels. I liked it though.