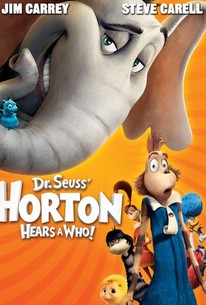 Critics Consensus: Horton Hears A Who! is both whimsical and heartwarming, and is the rare Dr. Seuss adaptation that stays true to the spirit of the source material.

Critics Consensus: Horton Hears A Who! is both whimsical and heartwarming, and is the rare Dr. Seuss adaptation that stays true to the spirit of the source material.

Critic Consensus: Horton Hears A Who! is both whimsical and heartwarming, and is the rare Dr. Seuss adaptation that stays true to the spirit of the source material.

Horton the Elephant struggles to protect a microscopic community from his neighbors who refuse to believe it exists.

Steve Carell
as The Mayor of Whoville

Will Arnett
as Vlad

Jack Angel
as Old Time Who

John Cygan
as Who

Jess Harnell
as Another Who

Debi Derryberry
as Who Mom

Karen Disher
as Who Kid

Heather Goldenhersh
as Who Girl

James Hayward
as Obnoxious Who

Joe Pasquale
as The Dentist
View All

News & Interviews for Dr. Seuss' Horton Hears a Who!

View All Dr. Seuss' Horton Hears a Who! News

Critic Reviews for Dr. Seuss' Horton Hears a Who!

The animation's ok. I didn't like Jim Carrey. I thought he was a distraction.

The sad thing is that this Horton doesn't stick by its central message -- that every voice counts -- the way Horton sticks to the Whos. It pretends to, but the sincerity is just too scary to commit to fully.

The team behind Ice Age capture the Seussian visuals without squishing emotions or squelching the sing-songy language. Listen closely: It's the sound of a million Who fans cheering.

And a motto moguls should take some time learning, if they'd like their movies to finally be earning, for it's not the cash that makes a prize of the art, but the warmth of the tale, and the size of the heart.

This new Horton 'toon may be state of the art. But it's great virtue isn't the 3-D animation. It's the good Doctor, whose writing about Whos never goes out of style.

Parents and kids can rejoice. Dr. Seuss' Horton Hears a Who! is a delight.

Hollywood has finally found the key to bringing a Seuss story satisfactorily to life.

A frequently beguiling fantasy packed with ticklish sights and vocals

Horton started as a book, less that 40 pages long. To make it a feature seems just a little bit wrong. The magic of Seuss isn't quite there. It's got the look but it's missing some flair.

Taking on Seuss has proven a challenge for Hollywood, but a nice balance has been struck here between authenticity and new ideas. This one's a winner.

Audience Reviews for Dr. Seuss' Horton Hears a Who!

This movie follows the ideas and imagination of Dr. Seuss, though it doesn't follow the book that well, it still is a great feast for the eyes.This film is one of Carrey's weaker films, but he does a fantastic job as Horton, Steve Carrel and Jim Carrey work off each other very well and very funny to listen to. All the other cast did a great as well, Seth Rogen, though having a very small part (no pun intended) is still very funny and the character is pretty interesting. Jesse Mcartney does a great job as the mayor's son Jojo as well, though he only talks about 4 times in the ending, its still a well done character, even though he has little to no dialogue in this whole film. The comedy is also very well done in this film too, my favorite scene being when the Mayor goes to the dentist and Horton is holding the clover while crossing a rickety old bridge that is falling apart.

I commend Dr. Seuss for his creative writing that intertwines silly and ingenious rhyming with a heartfelt message and story. In Hollywood, you can't just let talent like that be untouched, so what's Hollywood gonna do? They've gotta transform his book into a movie, and you know what? Surprisingly, this animated adaptation stays true to the source material... to an extent. Let's set this on a scale: the movie's an hour and 26 minutes long while the masterfully written counterpart hits less than 50 pages. An adaptation of the book would hit a mere 20 minutes. So, to prolong the running time, the creators of the adaptation decided to bring on additional writers to fill in the gaps. Let's say this: these writers hardly compare to Dr. Seuss. It's the same old "MTV-esque" jokes and pop culture references thrown in just so kids could get a quick laugh. Don't get me wrong though, the movie follows the same twists and turns as the book, but in between those turns are prolonged sequences of average dialogue. And the quality of this dialogue sticks out like a sore thumb especially when the film itself has sequences of Dr. Seuss' own writing within the mix. As you can see, there's two jarringly different types of dialogue within the film: one is witty, sharp, and smooth while the other is like any other average everyday type of banter. It gives the entire film an inconsistent tone. The original story had an incredibly pure and powerful message that was both direct and deeply moving. Fortunately, Hollywood didn't strip it out, but because of these tonal inconsistencies, by the time the film reveals its message, it isn't as powerful. As a matter of fact, even the 1970 TV adaptation of "Horton Hears a Who" executes its message and story more cohesively than this film. All in all, Dr. Seuss' writing was so creative and influential that in fact, it brings out the rough edges to what may seem like Hollywood's attempt to revive a "non-relatable children's book", when in fact, the original children's book is the best version of the story. But, there's no doubt that if you haven't even touched the original story, this version'll suffice.

Great animation about an elephant called Horton who hears the Whos calling for help. They live in a speck on a clover.

Dr seuss is a genius!