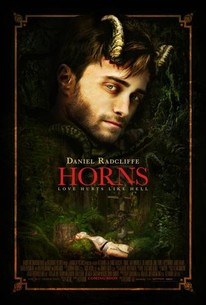 Critics Consensus: Horns is a bit of a tonal jumble, but it offers enough thoughtful horror-comedy -- and strong work from Daniel Radcliffe -- to hook genre enthusiasts.

Critics Consensus: Horns is a bit of a tonal jumble, but it offers enough thoughtful horror-comedy -- and strong work from Daniel Radcliffe -- to hook genre enthusiasts.

Critic Consensus: Horns is a bit of a tonal jumble, but it offers enough thoughtful horror-comedy -- and strong work from Daniel Radcliffe -- to hook genre enthusiasts.

Based on the novel by Joe Hill, Horns is a supernatural thriller driven by fantasy, mystery and romance. The film follows Ig Perrish (Daniel Radcliffe, "Harry Potter" films), the number one suspect for the violent rape and murder of his girlfriend, Merrin (Juno Temple). Hungover from a night of hard drinking, Ig awakens one morning to find horns starting to grow from his own head and soon realizes their power drives people to confess their sins and give in to their most selfish and unspeakable impulses - an effective tool in his quest to discover the true circumstances of his late girlfriend's tragedy and for exacting revenge on her killer. (c) Radius-TWC

Dean Wray
as Stan, the Barfly

Mitchell Kummen
as Ig Perrish at 13

Sabrina Carpenter
as Merrin Williams at 13

Laine MacNeil
as Glenna Shepherd at 13

Dylan Schmid
as Lee Tourneau at 13

Jared Ager-Foster
as Terry Perrish at 15

Jared Ager
as Foster-Terry Perrish at 15

Erik McNamee
as Eric Hannity at 15
View All

You never want to rip into actors. They're a sensitive bunch. They do a job that brutalises the soul at the best of times... And yet I really struggle with Daniel Radcliffe.

It seems to have been made by people who couldn't decide if their film was a horror flick, a whodunit, or a Hellboy knockoff.

Alexandre Aja's sprawling, wildly uneven film suffers from its continual shifts in storytelling style. It's at its best as a Twin Peaks-style mystery with supernatural elements.

Radcliffe, through his sheer presence and the piercing honesty of those big, blue eyes, makes this mixed-up material watchable.

Horns juggles a lot of balls, and admirably keeps them in the air for longer than you might expect. But it doesn't know how to bring them down gently.

It deserved better luck than being relegated to oblivion. A shame. [Full Review in Spanish]

[A] decadent delight...multi-pronged, interwoven tapestry of Biblical allegory that pushes the boundaries to almost sacrilegious silliness, but then artfully reins itself in with the strength of performances, indelible visuals and pure unadulterated fun.

If you yearn for a horror film trying to offer something new, Horns will certainly keep your interest.

Horns finds its horror in (hyper) reality, and it's all the better for it.

Hill's story is actually a beautiful romance disguised as a horror-comedy. If you let it, Horns will grab hold of you.

If the fact that the film stars Harry Potter isn't enough for you (it was enough for me), then see it because it's a good story that is not only dark and ominous but also has some hilarity mixed in.

An insufferably disjointed and overlong film that has serious trouble defining the rules of its universe and suffers from a messy structure, expository narration, intrusive flashbacks, predictable revelations (when not ridiculously sentimental) and a heap of clichés.

Based on the book by Joe Hill, "Horns" explores the dynamic between good and evil in very theatrical terms. For one thing, Daniel Radcliffe's character Ig is a stereotypically broken, alcoholic, trashed young man, who is trying to come to grips with the death of his girlfriend, as well as an entire town thinking he was the one who killed her. Steeped in the huge mountains of Washington state, and the lore of heaven and hell, this story follows Joe's investigation into finding Merrin's (Temple) real killer. Read more at http://www.bluefairyblog.com/new-blog-1/2015/3/26/horns

Delightful, funny and quirky -- with a mystery to boot. Radcliffe does a good job showing he has range beyond Harry Potter. It's a nice, strange diversion for a slow Saturday night.

At nearly two hours in length, 'Horns' certainly overstays its welcome and the once risque confessions of people (such as Iggy's dermatologist snorting oxycontin and his mom admitting that she wishes he was no longer her son) eventually lose their pungent sting along the way. Were it not for the gorehound ending (a shotgun blast to a deputy's head is plentifully dropsical), the semi-redundant 'Horns' could be classified as a Grimms Brothers love story and it's quite a poignant one. Iggy and Merrin feel like lovelorn soul mates and it's wrenching to see them torn apart. The childhood flashbacks might provide hindsight but they also feel like padded leftovers from the mischievous high-jinx of That was Then This Is Now. Radcliffe is an absolute chameleon with his American accent and he clearly relishes the devilish aspects of manipulating his enemies to self-mutilate. One brilliant piece of broad satire is when he goads competing news station to pulverize each other for an exclusive interview with him. The Scooby Doo-esque reveal of the killer resulting to two bloodthirsty climaxes that are missing human dimension and the film suddenly grasps at a hokey religious significance with Merrin's crucifix that it never earned. Overall though, 'Horns' is a nonpareil, but ultimately tedious adaptation that might be too comprehensive with Joe Hill's source material since it malingers on for far too long.