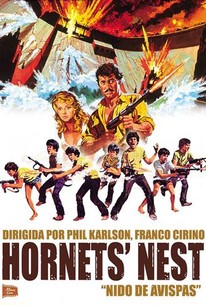 Captain Turner (Rock Hudson) is the American paratrooper who employs Italian children to blow up a strategic dam controlled by the Nazis. He is the only survivor of his unit gunned down during the jump. Rescued by the moppets, he slaps and rapes German medico Bianca (Sylva Koscina), which implausibly leads her to trust Turner and help in the clandestine mission. Aldo (Mark Colleano) is the youthful leader who helps Turner carry out the bombing in exchange for an attack on his village. When the Nazis control the small town, their allegiance quickly changes as they fight the Germans they once considered allies.

Viti Caronia
as Lieutenant at Village

Rod Dana
as US Colonel

There are no featured audience reviews yet. Click the link below to see what others say about Hornets' Nest!