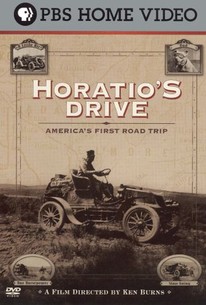 Ken Burns presents Horatio's Drive: America's First Road Trip, a documentary about Dr. Horatio Nelson Jackson's historic 1903 drive across the U.S. Starting off in San Francisco, Jackson drove his two-cylinder Winton touring car accompanied by his mechanic companion Sewall K. Crocker and his dog Bud. After two months of traveling, he arrived at his destination of New York City. Tom Hanks provides the voice of Horatio by reading personal letters written from the road. Horatio's Drive was broadcast on PBS in October 2003.

There are no critic reviews yet for Horatio's Drive: America's First Road Trip. Keep checking Rotten Tomatoes for updates!

There are no featured audience reviews yet. Click the link below to see what others say about Horatio's Drive: America's First Road Trip!