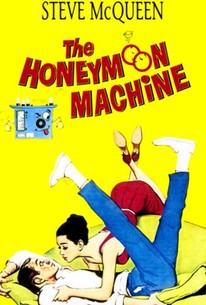 Just a few years before The Great Escape would catapult Steve McQueen to stardom, the charismatic actor played the lead, Lt. Fergie Howard, in this light romantic farce involving the computers on a Navy ship. Lt. Howard is playing poker on the good ship El Mira when he gets a brilliant idea. Why not use the ship's computer "Max" to figure out where the ball will land on a roulette wheel? After the ship docks near Venice, he and Ensign Beau Gillaim (Jack Mullaney), along with navy scientist Jason Eldridge (Jim Hutton) check out the casino there. Then they set up the ship's computer to receive incoming signals from the results at the roulette wheel, planning on it to predict which numbers will come up next. Trouble lies ahead when Admiral Fitch (Dean Jagger) intercepts the signals and assumes that the fleet is about to be attacked. While the subsequent chaos reigns, the women (Paula Prentiss and Brigid Bazlen) in these men's lives get involved.

A. Ben Astar
as Russian Consul

Critic Reviews for The Honeymoon Machine

There are no critic reviews yet for The Honeymoon Machine. Keep checking Rotten Tomatoes for updates!

Audience Reviews for The Honeymoon Machine

Silly bit of foolishness is empty cinema but fun in an mindless bubble gum way.