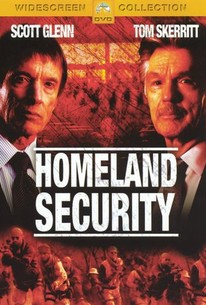 The NBC made-for-TV movie Homeland Security endeavors to put a human face on the events leading up to 9/11, and the post-tragedy formation of the U.S. Department of Homeland Security. On the verge of retirement, FBI agent Joe Johnson (Scott Glenn) is brought back to help organize the department, in concert with Admiral McKee (Tom Skerritt). Also on the ground floor of the department is feisty female CIA operative "Jungle Jane" Fulbar (Marisol Nichols) who has enjoyed (if that is the word) a long-standing friendly rivalry with the FBI. The "conscience" character hereabouts is security expert Sol Binder (Leland Orser), who blames the failure to "connect the dots" in the months prior to 9/11 on the lack of cooperation between the two major governmental peacekeeping agencies. Adding a dash of suspense to the otherwise predictable proceedings is the presence of McKee's daughter Melissa (Stephi Lineburg), who, along with her Arab boyfriend, is booked on the ill-fated Flight 29. Likewise enlivening things a bit is the lively-if-traditional villainy of all-purpose terrorist Saif Khan (Nicholas Guilak). The uneven, sometimes incoherent story structure can be attributed to the fact that Homeland Security was the heavily re-edited combination of two pilot episodes for a never-sold TV series. The "finished" product originally aired on April 11, 2004.

Whichever network decided to ashcan this sorry experiment was on the right track; someone should have gone a step further and left it sitting on a shelf somewhere.

There are no featured reviews for Homeland Security at this time.