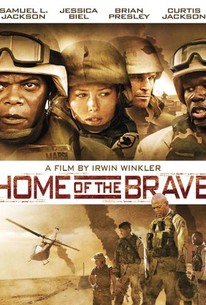 Home of the Brave Photos

As their tour of duty in Iraq draws to a close, four American soldiers learn that they are scheduled to embark on one final, fateful mission that will forever change their concept of war. Shortly after receiving the news that they will soon be reunited with their families back in the United States, a unit serving in Iraq is deployed on a humanitarian mission to deliver medical supplies to a remote Iraqi village. Upon arriving in the village, the unit is viciously ambushed and many lives are lost. Now, as the surviving members of the battalion return home and attempt to readjust to civilian life, the physical injuries and psychological scars sustained during that tragic event continue to take a heavy emotional toll on the war-torn soldiers. Samuel L. Jackson, Jessica Biel, and rapper-turned-actor 50 Cent star in an affecting psychological war drama from Academy Award-winning director Irwin Winkler. ~ Jason Buchanan, Rovi

Samuel L. Jackson
as Will Marsh

Kelly B. Eviston
as Jane Pooks

News & Interviews for Home of the Brave

RT on DVD: Hostel II Oozes Onto Shelves, and Criterion Serves Up Breathless!
RTIndie: Suit-Seeking Bob Dylan Isn’t the Only One Against "Factory Girl"
Box Office Guru Preview: Dragons and Webs Duke It Out at Theaters

View All Home of the Brave News

Critic Reviews for Home of the Brave

I must say the best thing about the movie is that it's interested in the soldiers, not the self-serving popinjays who seem to think the war is a big fat career-enhancing photo opportunity. The people who got shot at deserve most of the attention.

Earnest but lazy, fitfully laughable and insulting, Home of the Brave is cowardly work.

This is a solid and timely piece of work from Hollywood veteran Irwin Winkler.

Home Of The Brave ultimately says ... what? War is tough. That's fair, and so is [director] Winkler's reluctance to engage the politics of this particular war and focus on the soldiers that fight it.

The intentions are good. The actors have been assembled with care, and the production is polished. But everything feels assembled, as if it were put together from blueprints.

Iraq war vets cope with big issues; not for kids.

The war in Iraq gets a lathery soft soap treatment in producer-cum-director Irwin Winkler's distortion of emotions and realities associated with a group of returning soldiers.

...there's certainly no denying the effectiveness of one unintentionally hilarious moment in which Biel's spurned boyfriend exclaims, "I guess it only takes one hand to push people away!"

Patriotic claptrap masquerading as a touchy-feely salute to the troops.

While the film tries to be sensitive to the people's plight, it does itself (and the soldiers) a disservice by presenting them as brittle, emotionally fragile victims.

Missed opportunity for some cutting irony on behalf of indigenous people who have always been the victims in one way or another, of dubious celebrations like Thanksgiving, the laborers are instead merely a dramatic device - wallpaper really.

Audience Reviews for Home of the Brave

This is not a war movie... it's a movie about war. Home of the Brave has been the best movie to date on the psychological effects our soldiers endure when they return home from Iraq. It's riveting to see the demons they face. Truly inspirational... And don't worry about propaganda because it's neither Pro nor Anti War, the film does a great job of remaining completely neutral. This film boasts an A list cast with Samuel L. Jackson, Jessica Biel, Christina Ricci, Chad Michael Murray, Brian Presley, and 50 Cent, who was surprisingly impressive in this action drama. Don't be fooled, if you're looking for a movie chalk full of dead bodies, blood, and missing limbs, then this is not for you. The first 20 minutes is intense however (think Black Hawk Down), but the remainder of the movie is deep and touching.

Okay plain and simple, this movie is definitely similar to the film "Raising Flagg." Average, boring, random plot line, yet it contained some strong cast members who pretty much saved this film from being a disaster. So why is this movie such a disaster, you may ask? Plain and simple. It's a boring script which was probably written without any heart, considering how hollow the lines seemed to be. Nothing seemed to work with the scenes no matter who was in it. However some of the cast saved it from totally failing itself. If there were only minor actors who have had no previous experience it would have been pathetic. 2.5/5

I thought this was a great movie. I dont know how people thought it was a flop - it shows a side of the war that many movies are afraid to tackle, the aftermath. The movie takes an emotional ride through being there, leaving there, and surviving afterwords. It's done well and does justice for those who served and are dealing with hardships still today. It was a great cast and a great movie.

Good film.On the lines of the deer hunter but with the war focus on Iraq and with the dealing of today. Fine performance all round, Jessica Biel prove she more than a pretty face with Sam Jackson doing a fine job.All in all a good film with a bit of through.

Home of the Brave Quotes