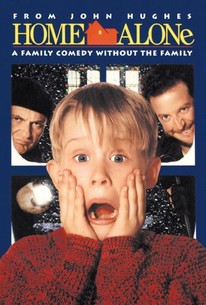 Home Alone is the highly successful and beloved family comedy about a young boy named Kevin (Macaulay Culkin) who is accidentally left behind when his family takes off for a vacation in France over the holiday season. Once he realizes they've left him home alone, he learns to fend for himself and, eventually has to protect his house against two bumbling burglars (Joe Pesci, Daniel Stern) who are planning to rob every house in Kevin's suburban Chicago neighborhood. Though the film's slapstick ending may be somewhat violent, Culkin's charming presence helped the film become one of the most successful ever at the time of its release.~ Stephen Thomas Erlewine, All Movie Guide

Larry Hankin
as Off. Balzak

Bill Erwin
as Man in Airport

Billie Bird
as Woman at Airport

[Culkin] is a vivid screen presence, almost incandescent with confidence.

Home Alone seems to be nominating itself as a Christmas classic [and] the film does go some way toward getting the job done.

The whole thing is gloriously tinged with nostalgia.

The movie is quite enjoyable as long as it explores the fantasy of a neglected little boy having an entire house of his own to explore and play in, and it still manages to be fun when he exhibits superhuman ingenuity and resourcefulness.

Pic boasts wonderful casting, with Culkin a delight as funny, resilient Kevin, and O'Hara bringing a snappy, zesty energy to the role of mom.

Home Alone has a premise that over the years became classic and an execution that was endearing from the beginning. [Full Review in Spanish]

The charisma of Macaulay Culkin matched with the intelligent script by John Hughes makes this the definitive holiday story that it is, appealing to all ages.

Tuned in to two key elements: the joyfulness of Steven Spielberg's ET, and the perennial chase of Tom and Jerry cartoons.

A hit for its slapstick humor as well as the age-old theme of a kid who bests the grown-ups.

An entertaining (but overrated) Christmas family movie that may be thin and silly (especially in its third act) but is also refreshingly funny and tender, with a great Oscar-nominated score by John Williams and hilarious performances by Culkin, Pesci and O'Hara.

A very good slapstick family film backed up with good performances from the adult cast. Kulkin....not so much. I particularly enjoy the burglars enthusiasm in the film. By no means however one of the most brilliant christmas films out there. Over rated but christmas fun.

If you want some good old fashion family violence...look no further. This is brutal man. Those guys took the beating of a lifetime....And it's funny as hell. Great storytelling....very funny buildup to how they find out he's home alone...and how he finds out they are coming to break in. This was a good year for Pesci. Nothing bas about GoodFellas. But this is what he should have got the Oscar for... (don't poop your pants....it's a joke)...He was really good though...

Kevin McCallister: This is my house, I have to defend it.  "A Family Comedy Without The Family." I've never been the biggest fan of Home Alone. That isn't to say that I hate it, but it just isn't a great family movie by any stretch of the imagination. It is relatively entertaining and moderately funny, but it ends up being just average. Culkin annoys the hell out of me in this movie and since he ends up being by himself for a good majority of the movie, annoying is going to be the lasting impression I take from it. A family is going to Paris for Christmas. The night before they go, the power goes out and everyone wakes up late. In a rush to get to the airport, a little boy, Kevin, is left all alone at home. The family doesn't realize this until they are in the air on the way to Paris. To make matters worse, two burglars are robbing all the families that are gone on the families street, and since all of them are supposed to be gone, Kevin's house is on the list. I will admit that as a kid I really did enjoy watching this movie, but over the years as I have watched it more and more, I have grown annoyed by the movie. It doesn't offer me anything. As a kid, the notion of being left at home is terrifying, but once you grow up it is easy to see that the situation isn't serious at all.  It isn't a horrible movie and it is sure to keep all the kids entertained and laughing at its childish humor throughout.