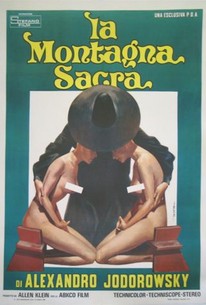 The most powerful individuals in the solar system are out to become gods and rule the universe.

Alejandro Jodorowsky
as The Alchemist

Horácio Salinas
as The Thief

Critic Reviews for The Holy Mountain

Hardly a moment passes in this movie without a situationist display of outrageousness; it is a dream tableau of the weird and occasionally wonderful.

Not even Buñuel with a brainful of Woodstock's bad brown acid could have made something this gloriously screwy.

This is an extraordinary visual concoction, loaded with stunning primary colors, anti-religious caricatures drawn from Diego Rivera and a succession of dreamlike, grotesque vistas worthy of Dalí at his most deranged.

Jodorowsky loves to confront the viewer with endless brutality and grotesque decadence and degradation, but here he expresses it with a rich, densely visual imagination.

Neither for the faint of heart or the linear of thinker, The Holy Mountain qualifies both as a fascinating period relic and an enduringly transfixing jaw-dropper.

What The Holy Mountain depicts, rather than a narrative, is a series of tests and learning experiences that the fool will go through in order to attain enlightenment.

An acid trip through the poison-tipped nettles of Jodorowsky's subconscious.

A rambling stream-of-consciousness quest that - in its final, self-conscious act - celebrates the primacy of the filmed image.

So loaded with symbols and religious references that the frames of the films flash by as if Jodorowsky were shuffling a deck of his beloved tarot cards...

The Old and New Testament scrambled as a most sustained 'shroom hallucination, one sight at a time out of Alejandro Jodorowsky's bottomless tank

Audience Reviews for The Holy Mountain

This psychedelic, LSD-induced masterpiece is not only visually ambitious, with an impeccable cinematography and editing, but also incredibly imaginative as it makes use of archetypes and symbolism in a brilliant social commentary, and it is wonderful how the fantastic score helps create the perfect atmosphere in every scene.

I've seen some movies that were really bizarre, trippy, drug firendly experiences, but this one might just take the cake, perhaps more so than Eraserhead. Overflowing with sacreligious imagery (that might be shocking, but didn't necessarily offend me personally), and tons of nudity, this is the sort of movie that if I tried to explain the plot (or the semblance thereof), it would only make it sound more ridiculous than it is, and you probbaly wouldn't want to see it. I can definitely say this isn't for all tastes, and I don't even really know for sure what was going on a lot of the time, but I will say that if you like "out there" type of stuff that is art directed to the Nth Degree, and appreciate symbolisn, mysticism, and want to see some really wonderful cinematogarphy and listen to a strangely jarring and ecclectic soundtrack, then you probably should see this at least once if you haven't already. I'm not gonna attempt to explain or describe this, since the internet can do a far better job of that, but I will say that seeing shots of birds fly out of bullet wounds, and amphibians dressed in costumes re-enacting the Spanish conquest of Latin America (and other events) are two things that I never dreams of witnessing, but feel like a better person for havign experienced it. And that's ultimately what this film is; an experience. It's not always pleasant, but it's far from boring, and sometiems even quite dazzling. I'm not entirely sure that Jodorowski isn't full of crap, and he might have been trying a little too hard with this one, but I think it was sorta cool to watch, even if I barely was able to get through it, mostly because I was exhausted and not entirely sure what to expect, but, if in the right frame of mind (and depending on your personal convictions), this might be a really rewarding viewing for the more adventurous of you out there.

Vomiting out visual ideas and lots of new age-pseudo mystical bullshit is enough to make me roll my eyes and/or laugh uncontrollably. Jodorowsky doesn't hold a thing here, nevertheless I think this kind of film is quite necessary to serve for other artist like some sort of red traffic light, there's a point where is just much ado about nothing.

"Your sacrifice completes my Sanctuary of a Thousand Testicles." lol! The only thing further out is a cartoon by A.A.P. Like a cinematic equivalent to the Beatles' Tommorow Never Knows - takes a few holy texts and rocks them out, hard. "Zoom back, camera!"