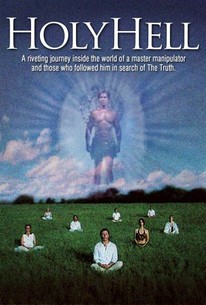 In 1985, recent film school graduate Will Allen became a member of The Buddhafield, a Los Angeles area spiritual group. Also acting as the group's official videographer, he began to document their activities, which centered on the mysterious leader they called Michel, or The Teacher. Over time, the group's dark side began to surface as total devotion turned to paranoia, until finally, unexpected truths about their enlightened leader were revealed--all in front of Allen's camera. This incredible, 22-year archive of video footage became the basis for HOLY HELL.

Holy Hell, raw and anguished, is not just a story about a terrible breach of trust, but one of loss, its creator mourning the relationships he had.

"Holy Hell" should have dug a lot deeper and told its story with a lot more finesse. What happened? Maybe, after all these years, Allen was still too close to his subject?

With unprecedented access to archival footage and former members of The Buddhafield, it's impossible to look away from Holy Hell.

An uneven blend of news program, suspense narrative and toward the end, somewhat saccharine self-help exercise.

Like watching a takedown of Hitler by a disillusioned Leni Reifenstahl, what emerges is one of the decade's strangest and most unsettling documentaries, especially given its as-yet-unwritten ending.

Mr. Allen has made an engrossing and tense documentary, though his insider knowledge is sometimes a hindrance.

A creepy but fascinating watch and a good addition to the ever-growing genre of "religious cult" films.

Though the filmmaker may ask himself whether enduring the personal nightmare of collecting footage for "Holy Hell" was worth it, it's certainly rewarding for an audience.

If you're already fascinated by the world of religious fanaticism, Holy Hell will leave you captivated.

The best Troma movie that Troma never made.

The subject matter is so intoxicating, the footage unique and powerful, that even the flaws in this documentary can't erode the power of the stories and fascinating characters presented in Holy Hell.

Even with admitted self-censorship, this intimate and often fascinating footage reveals a megalomaniac who genuinely inspired his early disciples.

A well-made and unbelievable story that is too bizarre to be true, about the horrors of spiritual cults and how a narcissist prima donna was able to deceive and control for over twenty years the lives of a bunch of pathetically naive people and make them serve him with absolute devotion.

HOLY SH*T! - My Review of HOLY HELL (4 Stars) In 1985, Will Allen, a recent graduate of the UCLA Film School, my alma mater, was searching for some meaning in his life, as one does when one lives in the viper pit of Los Angeles. He was gay, kicked to the curb by his parents, and dreamed of a world where people surrounded you with love. He found a spiritual group in West Hollywood called The Buddhafield led by a man who called himself Michel. While the group consisted of likeminded and stunningly beautiful souls who bathed each other in warmth, their leader presented himself as an overly tanned, muscle-bound, Speedo wearing, mysteriously-accented, soft spoken "Teacher". Faster than you can say BRAINWASH, Will found himself immersed in a bonafide cult. Lucky for us, he also became their official videographer, and for the next 22 years, he shot massive amounts of footage of this seemingly benign but ultimately dangerous group. It's this material coupled with interviews with many of the followers that constitutes the haunting, disturbing documentary, HOLY HELL. What started as a series of feel-good retreats transformed into increasingly desperate attempts for Michel to seize total control over his subjects. Allen, along with two of his sisters, felt the glow of enlightenment early on and appeared willing to look past Michel's obvious eccentricities. They included a surfeit of makeup over a face that would receive a LOT of surgical attention, eerie death stares, and a bulge in his swimsuit that must have made him challenging to take seriously. Like any master manipulator, Michel would work a long con, making each subject feel special before isolating them from their families and friends, tithing them for "therapy" sessions, and hand-picking those whom he felt were worthy of experiencing "The Knowing", billed as a visit with God. His coercive techniques would become much more nefarious over time, leading to revelations best experienced by viewing the film. HOLY HELL, while emotionally overpowering, suffers from a filmmaker too close to his subject. A more objective point of view would have filled in many of the gaps Allen clearly assumed we should know ourselves, such as a clearer explanation of "The Knowing". It seemed to be the Holy Grail of the Buddhafield experience, yet we're told next to nothing about its content and how Michel pulled it off. He, along with many of the disciples, seem to not be fully deprogrammed, with certain feelings and needs still lingering. This film also suffers from some unchallenged homophobia, which seems surprising given that its filmmaker is gay, but a more needling filmmaker presence would have picked up on some offhanded comments and addressed them. The last 10 minutes or so of the film, following a truly remarkable, unforgettable sequence in Hawaii, descends into a pile of mush, including an ill-chosen Snow Patrol song better suited to an episode of GREY'S ANATOMY than for use here. Because so many of the disciples, as well as Michel himself, have acting or show business aspirations, I sensed a little bit of performing for the cameras at times, but not enough to mar the experience. Ultimately, this is a film about performance. One disciple even goes so far as to recognize that when he was acting with Michel in a short film, he realized that the whole thing could be an act. A lot of the footage, which frankly is nothing more than a glorified home movie, consists of endless ballet practices, speeches, performances, makes the Buddhafield look like an adult summer camp, Michel's creepy presence suggests something much more foreboding. As Allen peels back the onion layers and reveals details about Michel's past, the film comes into remarkable, shocking focus. You realize that was was lingering in the back of your mind the whole time was actually coming true. Further, I guarantee you will never be able to watch ROSEMARY'S BABY the same way again. Yes, that film bizarrely comes into play. With other cult documentaries making their way onto our screens lately, such as the Scientology exposé , GOING CLEAR, this film not only adds to the discussion, but it surpasses most of them with a huge explosion of emotions. It felt more of a good companion piece to TEAM FOXCATCHER, the Netflix documentary about John du Pont's utter obsession and control over a wrestling team, which clearly acted as a conduit to his deeply suppressed desires. While TEAM FOXCATCHER neglects to delve into the elephant in the room, HOLY HELL dives right in and is all the more powerful and memorable as a result. Many of the subjects experience a "what was I thinking?" moment of clarity. With Michel's increasingly bizarre appearance, raging narcissism, and psychobabble, they wondered how they had been so fooled. Strangely enough, I remember seeing Michel around town a lot during the time of this film and recall thinking of him as a poor man's Siegfried and Roy all in one oddball package, even by West Hollywood standards! This remarkable film forces each of us to wonder how much we're willing to overlook in order to find peace and happiness in our own lives. It's a question worth asking, and this is a film, flawed as it may be, that's worth seeing.