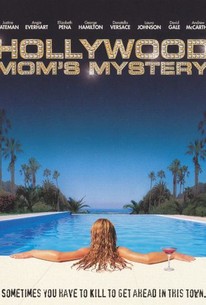 As the wife of fading Hollywood producer Kit Freers (Andrew McCarthy), children's book illustrator Holly Freers (Justine Bateman) would love to have some of the fame and fortune of her movie star neighbors rub off on her just once in a while. However, there is one aspect of living in Beverly Hills that Holly despises. Whereas she is deeply devoted to her daughter Chloe (Holliston Coleman), most of the wives in Holly's neighborhood regard their children as mere ornaments, treating motherhood more as a passing fad than as a blessing. This is especially true of Julia Prentice (Angie Everhart), the trophy wife of a popular sitcom star, who is gearing up to stage the baptism of her baby as a major media event. Nor is this the only reason that Holly resents Julia; it seems that the woman had once been Kit's lover. Thus, when Julia's corpse is found floating in the Freers' swimming pool, the police have two ready-made suspects -- and Holly suddenly becomes a celebrity, just like she always wanted...though she certainly didn't want it like this! Hoping to track down the real killer, Holly starts playing Jessica Fletcher (or is it Nancy Drew?) in the company of her handsome neighbor, screenwriter and mystery buff Justin Caffrey (David Gale). Originally telecast by the Hallmark Channel on August 8, 2004, The Hollywood Mom's Mystery is based on Dead Hollywood Moms Society, a novel by Lindsay Maracotta.

Lincoln Lageson
as The A.D.
View All

There are no critic reviews yet for The Hollywood Mom's Mystery. Keep checking Rotten Tomatoes for updates!

There are no featured reviews for The Hollywood Mom's Mystery at this time.