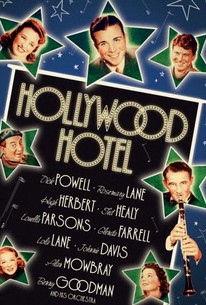 This was Warner Brother's last major 1930s musical. Directed by Busby Berkeley and featuring numerous cameos from the Warners stable, the title was gleaned from a popular CBS radio talent show. Dick Powell stars as sax player Ronnie Bowers who comes to Tinsel Town after winning a talent contest. He believes that his prize is a date with the gorgeous Rosemary Lane, so when he ends up with her double, he's miffed. Later he appears on Hollywood gossip columnist Louella Parson's radio show and becomes a star. Songs include: "Hooray for Hollywood," "Let That Be A Lesson To You," "Sing, You Son Of A Gun," "I've Hitched My Wagon To A Star," "Silhouetted In The Moonlight," and "I'm A Ding Dong Daddy From Dumas."

Fritz Feld
as The Russian

William B. Davidson
as Director Kelton

Louella Parsons
as Herself

Ken Niles
as Himself

Jerry Cooper
as Himself

Duane Thompson
as Himself

Susan Hayward
as Starlet at Table

A great deal of Hollywood Hotel is familiar, but a lot of it is funny.

It's an uneven film, that has a few exciting moments thanks to the lavish sets for the musical numbers and the screwball comedy.

Silly film is still interesting for some great music it contains as well as the Busby Berkeley touch plus amusing turns from Alan Mowbray, Lola Lane and Glenda Farrell plus the great Frances Langford in fine voice. Louella Parsons is stiff as a board but still one of the few chances to see her in action.