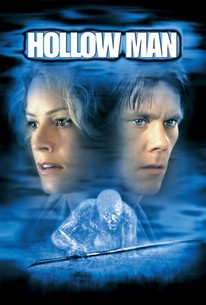 At a top-secret military lab, a group of brilliant young scientists have just unlocked the secret of invisibility. The team's arrogant leader, Sebastian Caine, ignores the risks and decides to test the dangerous procedure on himself- only to discover his fellow scientists are unable to reverse the effect. Working around the clock, Caine's colleagues struggle to devise an antidote. But Sebastian's intoxication with his new found power is growing, and he's come to believe his colleagues may be a threat to his very existence.

Sarah Bowles
as Girl in Car

Darius A. Sultan
as Gate Guard

Gary A. Hecker
as Gorilla Vocals
View All

the director keeps uncomfortably aligning the invisible cinemagoer's intrinsic voyeurism with Sebastian's own, showing us to what depths of depravity the male gaze can lead.

Despite a wealth of special effects and direction by Paul Verhoeven, Mr. Over-the-Top himself, this movie is surprisingly inert, more dull than anything else, with little to recommend it on any level.

The real invisible man here is Verhoeven, whose talent can barely be seen in Hollow Man.

As Hollow Man scrambles toward its conclusion, the dialogue founders and logic retreats.

Ultimately the title is most revealing. It's hollow, man.

Good FX do not a good movie make. Certainly a few hundred state-of-the-art effects could not help Hollow Man, a movie even more empty than its title character.

Challenged for much of a story, the film resorts to turning Bacon's laboratory into a haunted house, from where the see-through psychopath traps his colleagues to dispose of them one by one.

His habit of sneaking up and molesting women is disturbing, but other than that there's nothing frightening about an invisible man.

Even for mature viewers, this is a flop.

All this magical computer-generated whiz-bang, and they can't do more with it than a climax ripping off your choice of slasher movies and Alien films?

...one can't help but admire the glee with which Verhoeven has imbued the film's more disgusting moments...

Superb visual effects highlight Paul Verhoeven's slick, modern, and really violent retelling of The Invisible Man. Kevin Bacon stars as Sebastian Caine- a gifted, driven, and hard working, but also very arrogant and entitled scientist who, along with his team, are developing some revolutionary new intelligence technology for a military organization. Their project is a serum that renders the user invisible. Testing on animals worked just fine, and, despite some hesitancy, Caine, pressured by the organization and his own impatience, goes ahead with a human trial...on himself. Things start out fine, but they didn't count on the side effects, namely that the serum is irreversible. Sebastian soon goes insane, and it's not long before his madness consumes him and he turns into a homicidal maniac. Kevin Bacon is a good choice for the lead, doing a great job of bringing Caine's arrogance and madness to life. The two most notable cast members backing him up are Elisabeth Shue as one of his team (and a former lover), and Josh Brolin as another team member and current lover of Shue's character. I also liked Kim Dickens as Sarah, ANOTHER team member, though she's rather underdeveloped. The film starts off great, with big ideas, thoughtfulness, and wonderful effects. Verhoeven is known for this sort of thing, so I wasn't surprised. Unlike some of his other violent but intelligent sci-fi efforts though, this one starts off strong then devolves into a typical slasher movie. That's not a completely bad thing, but it is disappointing. They also seem really eager to get right to the mayhem aspect of Caine's insanity instead of drawing out the suspense. All in all, this is a really flawed, but still decently entertaining effort.

Interesting concept by director Paul Verhoeven, Hollow Man is an intense Sci Fi horror film with a good cast of actors. The special effects are well done, however considering that this is a film by Paul Verhoevem, it lacks in delivering what you'd expect from the man that brought classic films such as Robocop, Total Recall and Starship Troopers to the screen. This is still a well acted film that has it its moments. Kevin Bacon gives a stunning performance, and Hollow Man manages to thrill despite its flaws. I felt that this was a departure from Verhoeven's previous work, because after all he did direct Robocop. Hollow Man though is a good film for what it is as it blends Sci Fi elements with horror and thrills into one film. The story is quite interesting, and works quite well. However there are a few things that could have been done better. Despite the flaws the film is quite entertaining and is visually appealing as well as having an interesting plot. The acting performances delivered by the cast are wonderful and they each bring something effective to the screen. Kevin Bacon is great in his role of Sebastian Caine. Verohoeven's change of direction works well, and he proves that he can make something different while retaining his signature style. Hollow Man is an effective Sci Fi horror film that has an intricate story and good acting. This is a better film than what most people say and it delivers effective chills with a good enough story to keep you interested till the end. A good film worthy to watch.

Kevin Bacon starred with Kevin Costner in JFK (1991)...who was one of the star cast members in 3000 Miles to Graceland with Courtney Cox...who used to attend summer camp as a child with Chip Brown...who used to work with me at my last job. There I did it in 4!!! Lmao! Oh yeah... the movie was okay....